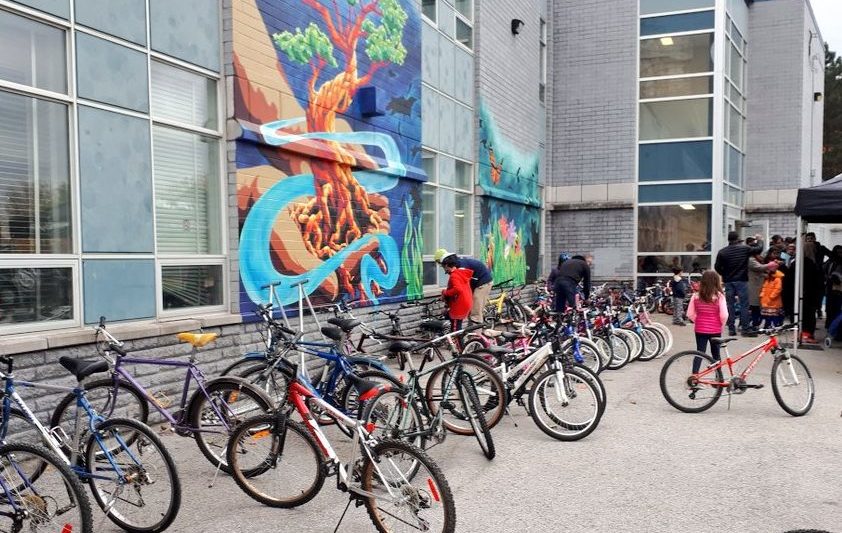 The final Bike Flemingdon Thorncliffe Park outreach event was held at the end of October at Valley Park Middle School. This event provided a significant opportunity for the community to come together to discuss and learn about the City of Toronto’s bike study and plans for new bicycle facilities in the area, which include three improved access points to the Don Valley Trail and new bike lanes on four local streets. The event combined a number of activities: bike fixes, maintenance and safety demonstrations, food and snacks, and information sharing and feedback opportunities, as well as a giveaway of 150 bikes with helmets and bike locks. The bikes were generously donated by Morning Glory Cycling Club and Gears Bike Shop, who collected and refurbished kids’ bikes to be given away. CultureLink Settlement and Community Services provided cycling program information and Evergreen gave basic bike maintenance demonstrations.

Parents and children also participated in discussions led by City staff and TCAT employees, with help from our community animators and neighbourhood partner, the Flemingdon Health Centre. Discussions promoted knowledge and awareness about bike safety and the proposed new bike facilities to be soon found throughout the area. The aim of these new facilities will be to improve accessibility and safety, promote new ways for cyclists to travel around the area, and enhance connections to local trails and public transit.

Many of the participants had engaged with our outreach team at previous community events and were well-informed about the issues. Most were very glad to have these changes coming to their area and expressed the need for increased investment from the City in their neighbourhood.

Overall, this engagement series has reached a large number of residents and raised the level of awareness about cycling in the community as a whole. Its success is due to its partner-based approach, which engaged local community partners and local residents as animators. These strategies are important when the communities involved face barriers to participation and do not typically engage in official planning processes. TCAT’s Active Neighbourhoods work piloted participatory planning approaches in four neighbourhoods of this kind over the past four years, including in Thorncliffe Park and Flemingdon Park from 2014-2016.