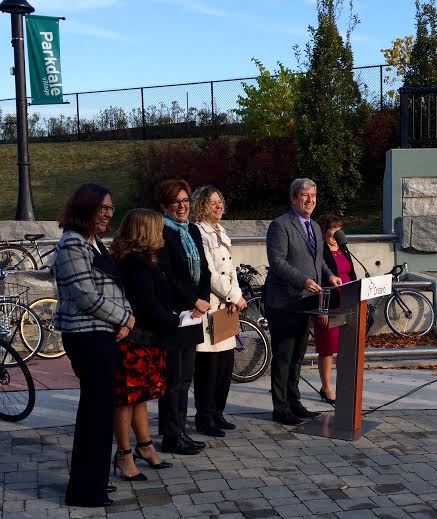 Long-awaited changes to Ontario’s Environmental Assessment process to streamline large-scale cycling projects has led to the completion of a study conducted by the City of Toronto to extend the West Toronto Railpath.

In March 2015, TCAT and Cycle Toronto made a joint call to the Ministry of the Environment to expedite the process (following TCAT’s previous letter in 2014). On October 22, 2015, there was an official announcement of the changes to the EA process at the future site of the West Toronto Railpath extension. TCAT Director Nancy Smith Lea was in attendance at the celebratory event that featured remarks by the Minister of Environment Glen Murray, MPP Eleanor McMahon, and others.

An Environmental Study Report (ESR) has been prepared and is available for review for a 30 day period from January 14, 2016 to February 15, 2016, at the ESR project website and at the following Toronto libraries: Parkdale, College Shaw, and Fort York.

Following the comment period and the receipt of necessary approvals and funding, the City of Toronto intends to proceed with the detailed design and implementation of the West Toronto Railpath Extension.