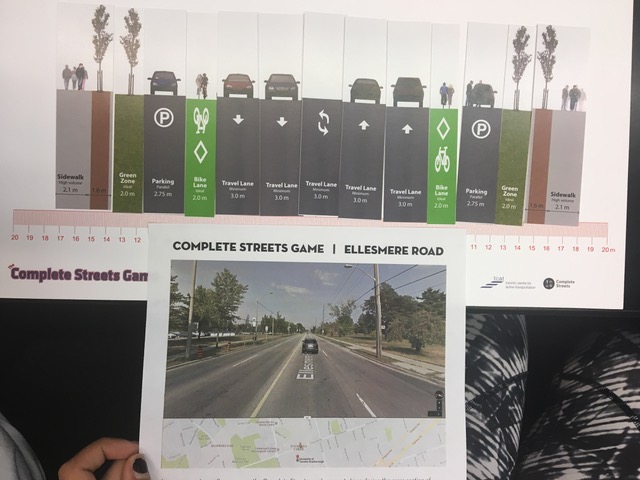 If you’ve ever used the Complete Streets Game, please take a moment to fill out this short (5-10 minute) survey, and share with us what you love about the game, and what can be improved.

In 2013, TCAT Steering Committee member Chris Hardwicke developed the Complete Streets Game.  Ever since, it has been used across Canada as a dynamic, participatory, and accessible tool to co-design Complete Streets. The game has had phenomenal uptake, even though when TCAT initially launched the game we envisioned it as a beta version that we would develop further as funds became available. We are pleased that now, four years later, we are ready to develop the “Complete Streets Game 2.0”!

The Complete Streets game has been used in contexts as varied as design charettes, classrooms, public consultations, conference sessions, and more. Recently, the game travelled to the University of Toronto Scarborough, where TCAT’s Car Martin and Tessa Nasca engaged a class of over 100 University of Toronto Scarborough students in Professor Alexandra Flynn’s City Politics course.

Car spoke about participatory design and social impact, and discussed the Active Neighbourhoods participatory planning approach, sharing stories from the Thorncliffe Park and Flemingdon Park pilot project in Toronto. Tessa then led the class in using the Complete Streets Game to reimagine two streets near the University of Toronto Scarborough Campus, allowing students to experiment with how their campus streets could support active transportation users. The guest lecture gave students the opportunity to try a hands-on participatory design activity, and to learn how co-designing can result in creative, responsive, and active public spaces.

As we develop the Complete Streets Game 2.0, we are looking for your feedback! Since the beta version was released in 2013, the Complete Streets and active transportation planning fields have grown and developed, design standards have changed, and facility type options have increased. We plan to modify the original concept, to include updated standards, and to package the game as a more durable finished product. We are planning to develop kits of magnetic pieces, stored in a custom tin.

We also want to thank the Active Neighbourhoods Canada project and the City of Peterborough, who have generously provided funds to develop the Complete Streets Game 2.0.