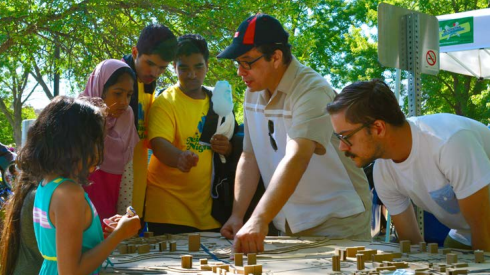 On April 9, 2018 TCAT made a submission to the City of Toronto Public Works and Infrastructure Committee regarding the proposed installation of bicycle lanes on Thorncliffe Park Drive, Grenoble Drive and Deauville Lane, and bicycle lanes and cycle tracks on Gateway Boulevard. (PW27.13).

Throughout this process, between 2014 and 2016, TCAT identified residents’ concerns, desires, and transportation habits, and developed potential transportation solutions with help from local professionals in planning, design, and community development. This work is summarized in TCAT’s Neighbourhood Plan: Thorncliffe Park and Flemingdon Park (2016).

In 2017, TCAT, in partnership with the Flemingdon Health Centre, assisted the City of Toronto to enhance resident engagement, capacity development, and outreach for the 2017 Bike Flemingdon Park and Thorncliffe Park Study. TCAT was tasked with hiring, training, and coordinating a team of local Community Animators who engaged hundreds of local residents in conversations about cycling and bike facilities, and gathered feedback regarding planned bicycle routes in the area. Many of the participants had engaged with our outreach team at previous community events and were well-informed about the issues. A total of 747 local residents were engaged in the process. The vast majority (94%) expressed support for the proposed new bicycle facilities in Flemingdon Park and Thorncliffe Park.

A critical gap that is currently missing from the proposed plan is to provide safe access across the Overlea Boulevard Bridge. This is the only connection for these two very intertwined communities. Many children need to cross this bridge daily to get to and from school and must contend with fast-moving traffic, a very narrow pedestrian crossing, and no dedicated bicycle facility. Residents expressed (in both TCAT’s consultations in 2014-2016, and again in 2017) a need for bike lanes and improved safety along Overlea Boulevard.

Overall, with the exception of not providing any safety improvements for Overlea, the proposed plan provides welcome and much-needed bicycle infrastructure in an area of the City that has long been underserved.

The Committee adopted the recommendation at its meeting on April 11, 2018. It was adopted by City Council without amendment and without debate on April 24, 2018.