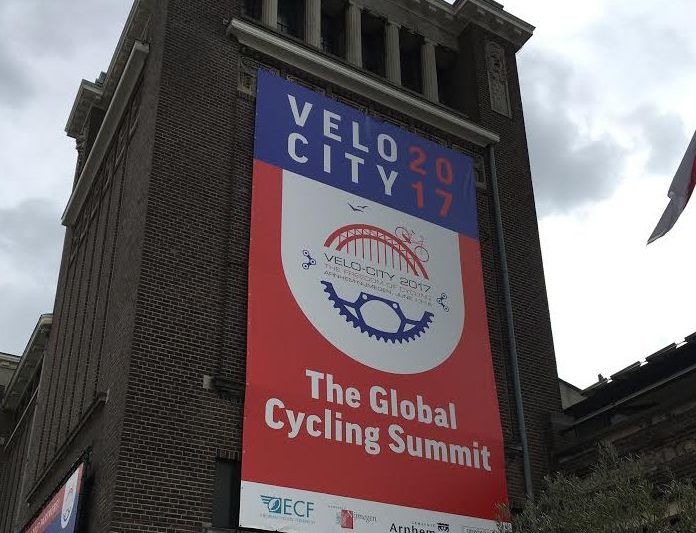 This month, TCAT is on the provincial, national and international stage, sharing research from the past year related to active transportation at summits and conferences.   June started off with TCAT Director Nancy Smith Lea at the Eastern Ontario Active Transportation Summit, held in Mississippi Mills.  She presented on Complete Streets in rural communities, research that came out of TCAT’s recent publication, Active Transportation Planning Beyond the Greenbelt.   She then attended the first National Bike Summit, hosted on Parliament Hill by Canada Bikes.

This past week, she has been at Velo-City 2017, a global cycling summit held this year in Arnhem and Nijmegen, the Netherlands. She presented on the Guide to Safer Streets Near Schools: Understanding Your Policy Options in the City of Toronto, a resource to help local school communities and residents improve traffic safety in their neighbourhoods.  She also spoke at a pre-summit colloquium, called Scientists for Cycling, on the Cycling Behaviour and Potential in the Greater Toronto and Hamilton Area (GTHA) project, which was led by Dr. Raktim Mitra at TransForm Lab, Ryerson University. The paper documents current patterns of cycling in the GTHA, quantifies cycling potential in the region, and identifies areas with high propensity for cycling.

Before the month is done, TCAT’s Mikey Bennington will be heading to Barcelona, Spain, for the International Conference on Transport and Health. He will be presenting on TCAT’s involvement in Active Neighbourhoods Canada project, which uses participatory planning to help low income communities re-envision their streets and public spaces.  Mikey’s abstract was tied for second highest scoring practitioner.