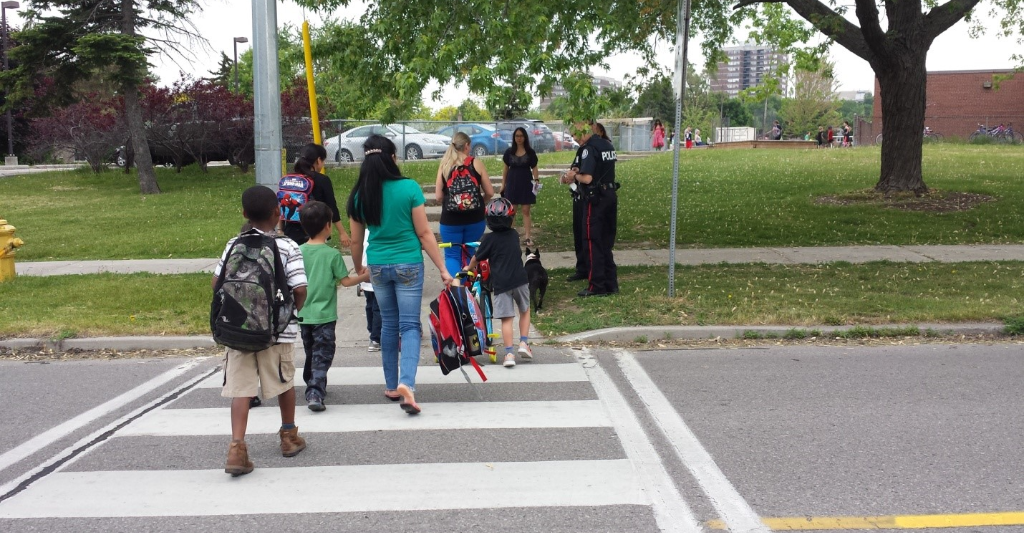 Walking is an easy, inexpensive, and healthy way for kids to get to school.

Unfortunately, not every child in Toronto has a safe walk to school.

Toronto was reminded of that in February 2018, when Duncan Xu was tragically struck and killed walking home from school in Scarborough.

Dangerous driving around schools, such as speeding, texting while driving, or not obeying traffic signs, puts kids at higher risk of getting hit. A 2016 study found dangerous driving at more than 100 Toronto public elementary schools. The most common dangerous driving behaviours were unsafe parking and child drop-offs, such as dropping children off across the street from the school.

Children in some areas of Toronto also are exposed to more dangerous environment walking to school than others.

More at risk schools, measured by factors such as household income, parent education, and student immigration status, are associated with higher child pedestrian-motor vehicle collisions in Toronto, according to a 2016 study.

These challenges are not impossible to address. Nor do they mean that walking isn’t a safe way for kids to get to school.

Walking to school is not related to child pedestrian collisions, if the built environment is safe, according to a team of researchers and medical doctors at the Hospital for Sick Children in Toronto, York University and the University of Toronto. Modifying the built environment around schools can reduce unsafe driving and pedestrian behaviors, leading to a safer walk to school.

The Guide to Safer Streets Near Schools can walk you through how to create safer streets in your neighbourhood, step by step.

Moves in the right direction include:

The benefits of safer streets near schools aren’t just felt by children. Improving conditions for walking and cycling can have a positive impact on local economies and equity. Traffic calming and reduced traffic speed can attract customers and new businesses to an area, helping to spur development and progress.

By taking steps to build safe streets, we can ensure that kids from all walks of life have a safe walk to school.

For a variety of other educational and promotional tools, visit saferoutestoschool.ca.