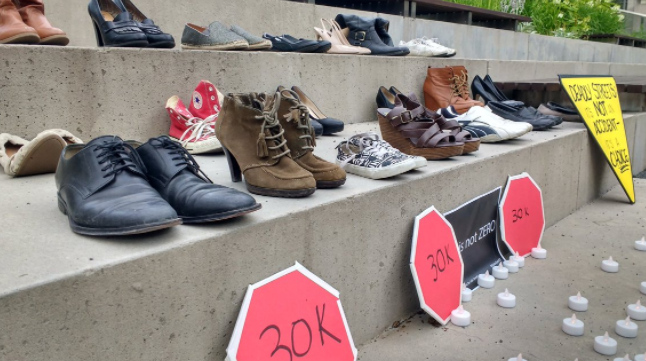 Last year recorded the highest number of pedestrians deaths in Toronto in more than a decade, most over the age of 55. Since then, both the government and the media have focused attention on road safety, from the City of Toronto’s Vision Zero Road Safety Plan, to Global News’ recent series, Life is Cheap.

In June, TCAT attended the first Vulnerable Road Users Symposium, put on by the Ministry of Transportation. The day was structured around the three E’s of Engineering, Enforcement and Education. Although we have a long way to go on the engineering side to make up for decades of building streets for cars, initiatives like the Ontario Municipal Commuter Cycling program are encouraging. Progress is also being made on the enforcement side, with new legislation in place this year, namely Bill 65, Safer School Zones Act, which gives municipalities the ability to set lower speed limits and implement photo radar in school zones. In a speech, Transportation Minister Steven Del Duca hinted at upcoming legislation for vulnerable road users, but did not provide further details. On the education side, a shift in perspective is still needed, as much of the MTO work that was highlighted promoted pedestrian and cyclist behaviour change (ie. “Heads Up for Safety,” “Brighten Up”).  While a focus instead on drivers as the operators of potentially deadly vehicles would be more effective, ultimately, all humans make mistakes and roadway design should allow that to happen, without deadly consequences.

At the end of the month, Friends and Families for Safe Streets, an organization of those affected by road violence, held its first vigil in Nathan Philips Square, to remember those who have lost their lives on Toronto’s streets. The vigil was held on the one year anniversary of Toronto’s Road Safety Plan, and will continue to be held on the last Tuesday of every month.  The next vigil is scheduled for July 25th at 6pm.