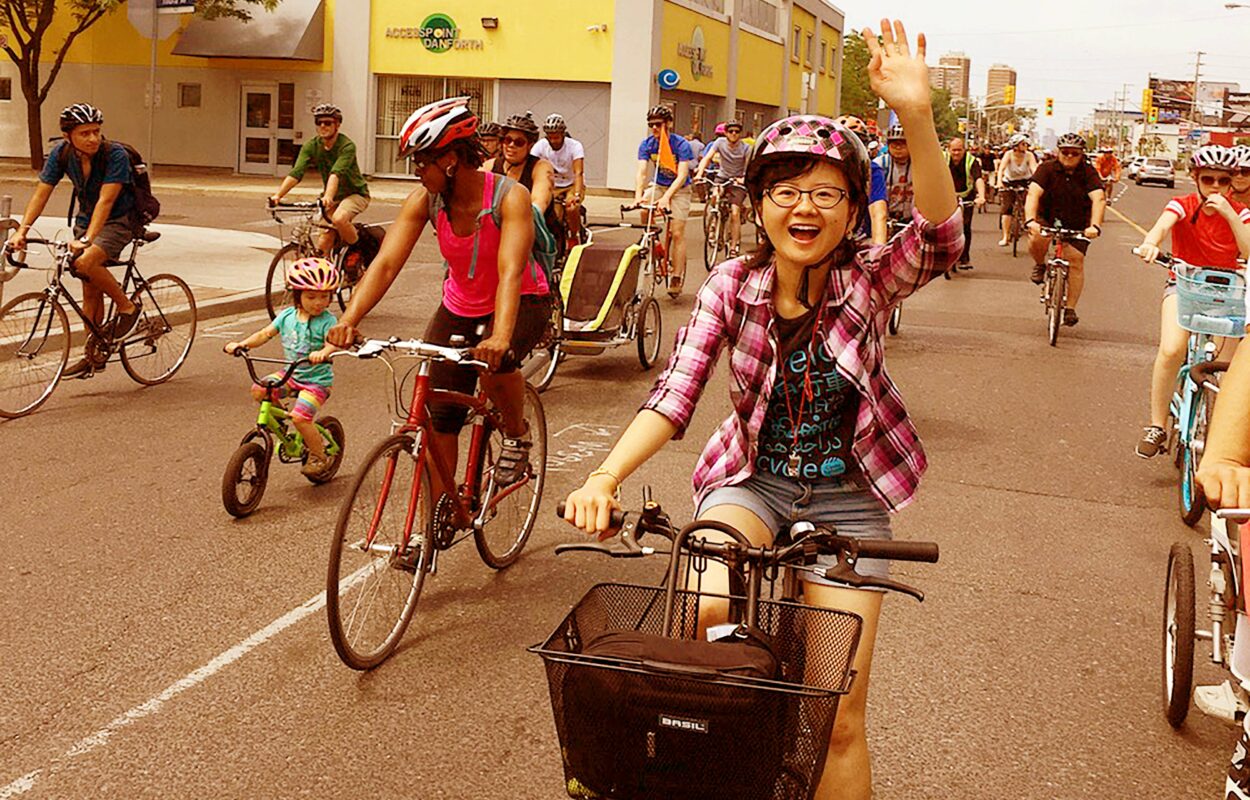 Last month TCAT marked the end of one chapter in the Scarborough Cycles story. Our funding from the Metcalf Foundation enabled four very productive years in which Scarborough Cycles grew from an idea on paper to a bustling community hub with tools in place to move the idea from one location to many. We are thrilled that the Scarborough Cycles program continues on. Our host partner, Access Alliance Multicultural Health and Community Services, has fully adopted the program. In collaboration with the City’s Tower and Neighbourhood Revitalization Unit and Solid Waste Management Services, they have even opened another bike repair hub location in the Lawrence Orton neighbourhood.

These hubs push the boundaries by locating in suburban neighbourhoods where there is not yet much cycling. Whereas downtown cycle tracks like Bloor, Richmond and Adelaide see thousands of cyclists on a daily basis and a bike shop can be found on almost every block, only 0.5% of trips are made by bike in Scarborough and there’s just one bike shop. These two facts are connected – a bike shop can’t open if there are no customers! But it’s also difficult to be a cyclist if there’s nowhere to go to fix a flat or a broken chain.

This isn’t to say that there isn’t interest in or demand for cycling. Eighty-eight percent of Scarborough residents responded to a recent survey saying they support a safe cycling network. Nearly 500,000 trips per day are 5km long or less and could be cycled. In many Scarborough neighbourhoods, more than a quarter of households don’t own a car. Car-pooling is higher than in downtown, and transit use is high even though service levels are low. These patterns indicate a mobility gap that cycling could fill.

The Scarborough Cycles bike hubs are in the business of creating cyclists. They offer DIY bike repair to get broken bicycles back on the road and build-a-bike or bike loan programs for people who don’t have one. They offer cycling skills training and mentorship for people who are interested in cycling, but hesitant about trying it, or just haven’t ridden in years. They organize community rides to build camaraderie and social connections around cycling, and to the joy of cycling. Over the past four years, we’ve seen how these efforts have incubated a culture of cycling in Scarborough.

Seven Signs Cycling is Changing in Scarborough (and beyond)

To be clear, TCAT didn’t invent the idea of a community bicycle hub, which has a long and important tradition in Toronto (see current membership of Toronto Community Bike Collectives), southern Ontario, and across North America, as evidenced by the upcoming Bike! Bike! conference taking place in Toronto. Peel Region has been a leader supporting community bike centres in Brampton and now Mississauga and Caledon. Numerous community bike centres in cities like Hamilton (New Hope Bikes) and Peterborough (B!KE) support cyclists and jump start change. TCAT feels honoured to learn from and work alongside these long-standing community initiatives while taking a different tack by incubating the community bike hub model within established community and government agencies, with a particular focus on increasing cycling in suburban areas that are historically underserved.