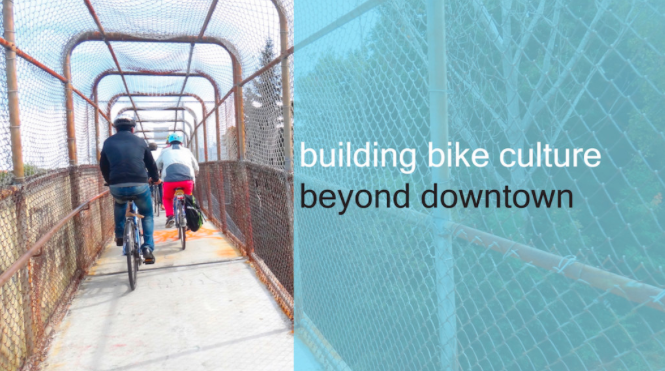 TORONTO, June 16, 2016. The Centre for Active Transportation (TCAT) is pleased to announce the launch event of the Scarborough Cycles community bicycle hub at AccessPoint on Danforth (3079 Danforth Ave., one block east of Victoria Park Ave.) on Saturday June 18, from 12pm-2pm.

Planned activities include a ribbon cutting, bicycle safety checks, helmet fittings, bicycle decorating, a slow bicycle race, face painting for children, and a 2pm group ride to Rosetta McClain Gardens. At the event, residents can obtain a copy of the new Toronto Cyclists Handbook produced by Cycle Toronto, which has been translated into 13 languages, and also register their bikes with the Toronto Police Service, 41 Division.

“Our research has revealed that many households within Scarborough do not own a car (up to 38% in some areas) and transit options are limited”, says TCAT Director Nancy Smith Lea. “With the launch of the bicycle hub at Access Point on Danforth, we celebrate this small but important step to expand transportation options for Scarborough residents.”

AccessPoint on Danforth is part of Access Alliance Multicultural Health and Community Services, which has been helping Toronto’s diverse communities achieve health with dignity for the past 25 years. “We [Access Alliance] have a long history of identifying and addressing different social inequities that have an impact on the health of Toronto’s most vulnerable communities. We’re proud to partner with TCAT and excited at the long-term potential of this project to make cycling culture accessible outside of the downtown core”, said Axelle Janczur, Executive Director of Access Alliance.

Funded by the Metcalf Foundation Cycle City program, ‘Scarborough Cycles: building bike culture beyond downtown’ is a multi-stakeholder project led by TCAT and supported by CultureLink Settlement and Community Services, the Toronto Cycling Think & Do Tank at the University of Toronto, and Cycle Toronto. The primary goal of the project is to increase participation in cycling for transportation. In 2016, TCAT has established two community bike hubs in Scarborough. The first is at Access Point on Danforth, 3079 Danforth Ave., and the second is at Birchmount Bluffs Neighbourhood Centre, located at Birchmount Community Centre, 93 Birchmount Ave. Learn more about Scarborough Cycles at www.scarboroughcycles.ca and via Twitter at @ScarbCycles.

About The Centre for Active Transportation (TCAT)

TCAT, a project of the registered charity Clean Air Partnership, advances knowledge and evidence to build support for safe and inclusive streets for walking and cycling. We believe that active transportation plays a critical role in creating environmentally and economically sustainable cities. Find out more at www.tcat.ca.

A PDF version of the press release is available here.