Toronto is Canada’s largest urban centre, and, as in many other North American cities, removing on-street parking to install bike lanes can be contentious. On three occasions, between 2009 and 2017, The Centre for Active Transportation (TCAT) studied the local economic impacts (positive, negative or neutral) of removing on-street parking to install a bike lane and to understand the role played by the travel patterns and attitudes of both visitors and merchants. The findings have disproved the myth that parking is essential to downtown small business. Learn about each of our Bloor Street Bike Lane Economic Impact Studies and download the reports below.

In 2019, TCAT’s research into the impact of Toronto’s bike lane pilot project on Bloor Street was published in the peer-reviewed Journal of the American Planning Association (JAPA) in an article titled “Measuring the Local Economic Impacts of Replacing On-Street Parking with Bike Lanes“.

Also in 2019, when the City of Toronto undertook a study and public consultation for the Bloor West Bikeway Extension, TCAT was commissioned to create a Bikeways and Business on Bloor Street: Research Summary flyer, and to host a Bikeways & Business on Bloor: What are the Economic Impacts? webinar on January 23, 2020.

In 2017, TCAT released the Economic Impact Study of Bike Lanes in Toronto’s Bloor Annex and Korea Town Neighbourhoods, a research report about the economic impacts of the Bloor Street pilot bike lane, as well as the effect on travel patterns and attitudes of visitors and merchants. Using a case-control and pre-post design, over 3,000 visitor and 625 merchant survey responses revealed once again that 90% of customers to Bloor arrived by foot, bicycle or transit.

Following the bike lane installation some of the key study findings were: 1) There are more customers on Bloor. The number of reported customers served by merchants increased on Bloor Street during the pilot. 2) Customers are spending more. 3) Vacancy rates on Bloor are stable. 4) People who walk and bike to Bloor visit the most often and spend more than people who drive. 5) Few people drive to Bloor.

Findings from this research were published in the Journal of the American Planning Association in an article titled “Measuring the Local Economic Impacts of Replacing On-Street Parking with Bike Lanes.”

The full report, an executive summary and a graphical snapshot are available as pdfs below.

In 2010, TCAT’s second study replicated the methodology in Bloor West Village (Bike Lanes, On-Street Parking and Business Year 2 Report: A Study of Bloor Street in Toronto’s Bloor West Village), another neighbourhood in Toronto in a location further from the downtown, and found similar results to the Bloor Annex study. In the Bloor West location the study found that only 20% were driving to shop and the majority of merchants believed that a bike lane would increase their business. The report is available for download at the bottom of this page.

In 2009, TCAT published a groundbreaking study, “Bike Lanes, On-Street Parking and Business. A Study of Bloor Street in Toronto’s Annex Neighbourhood”. It found that only 10% of customers were driving to Bloor Street in the Bloor Annex downtown neighbourhood and that patrons arriving by foot and bicycle visited the most often and spent the most money per month. The report is available for download at the bottom of this page. 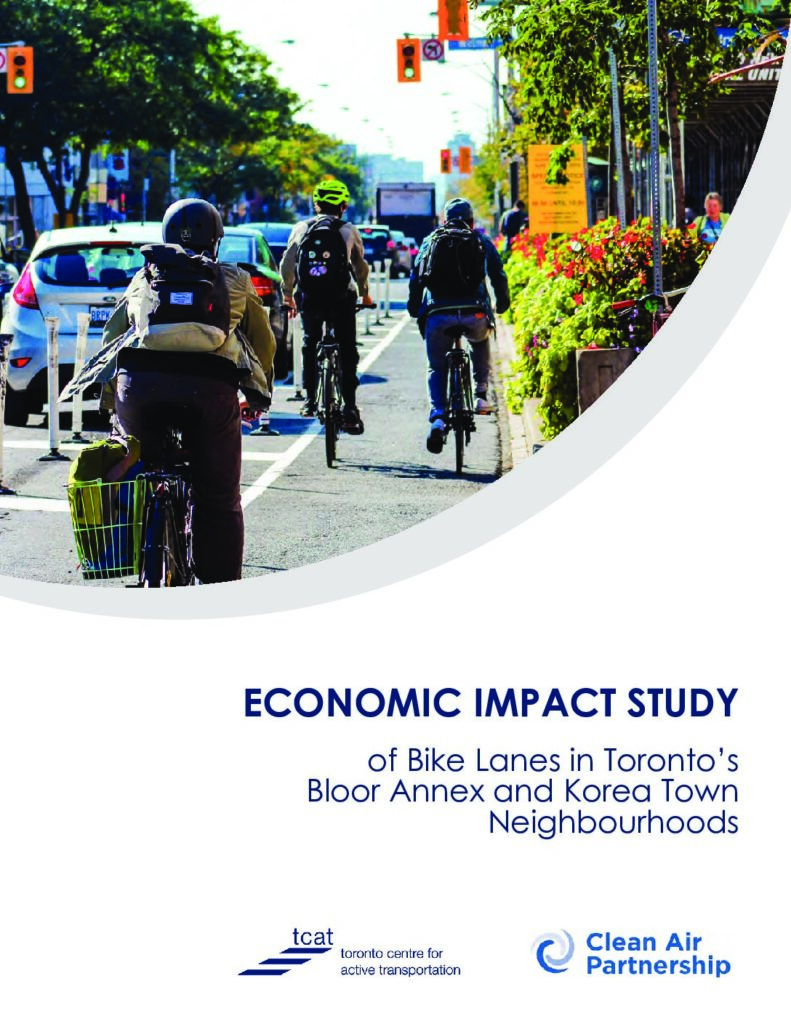 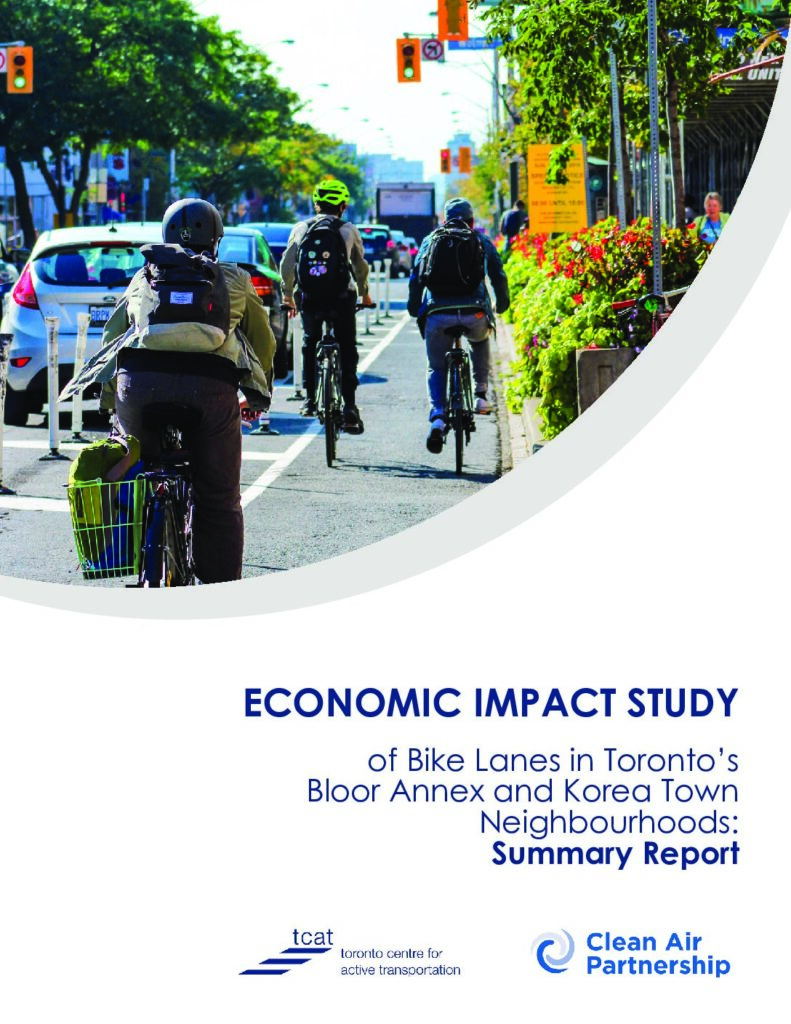 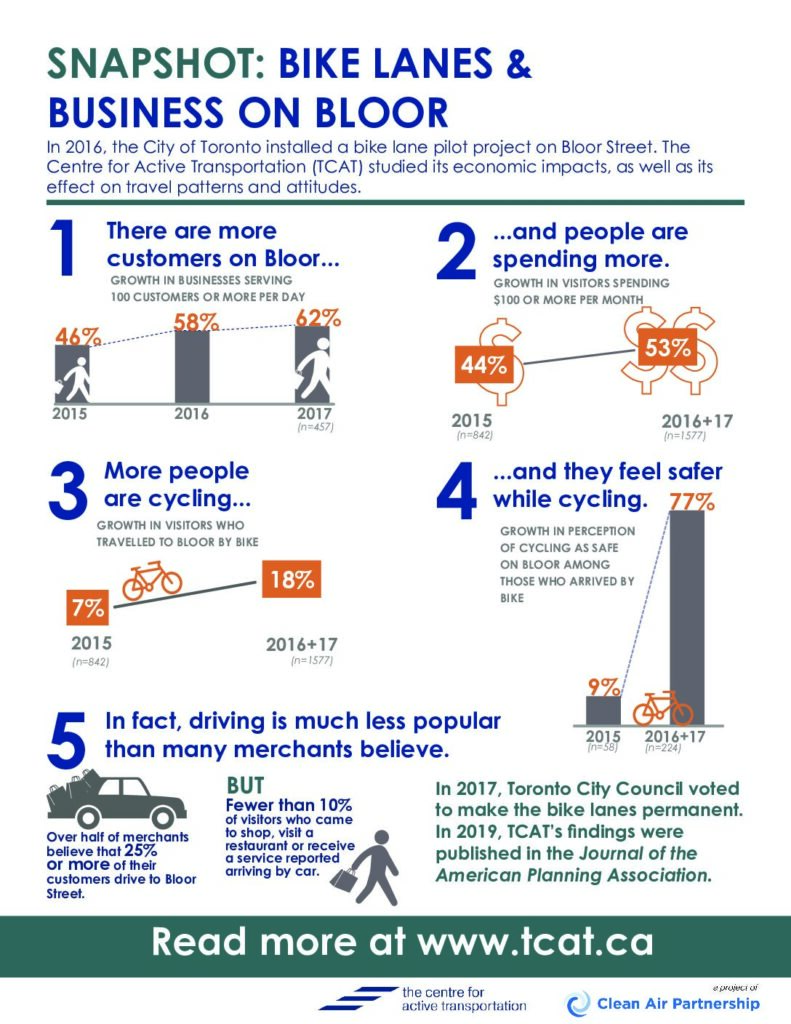 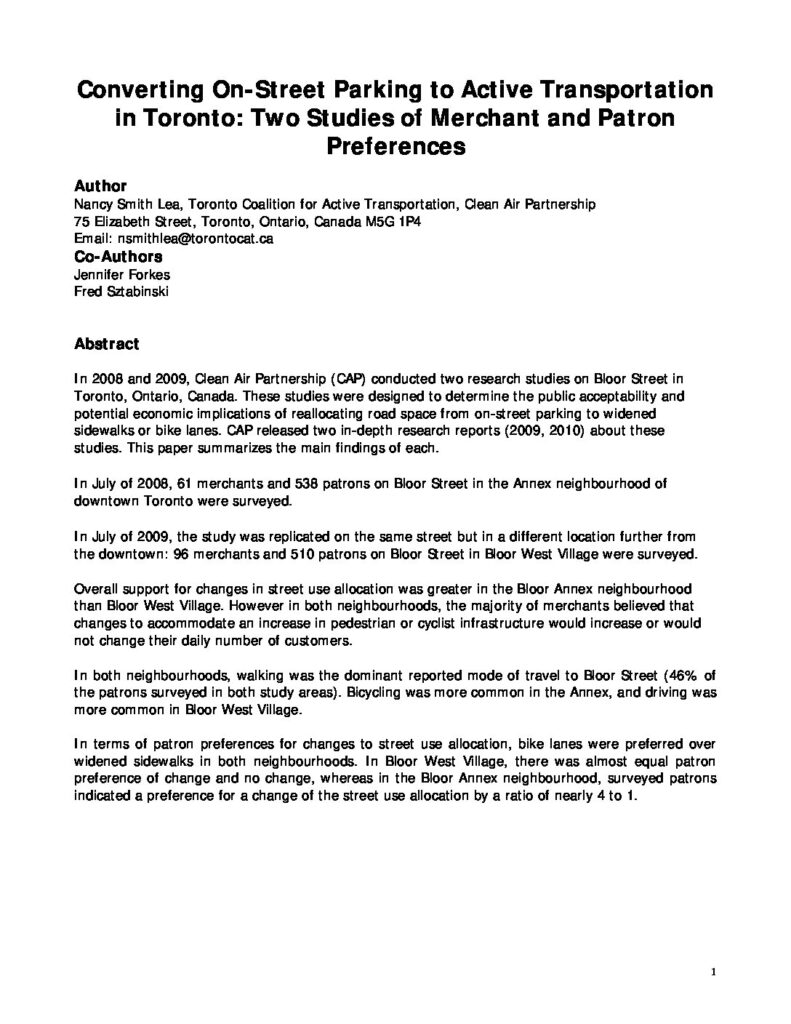 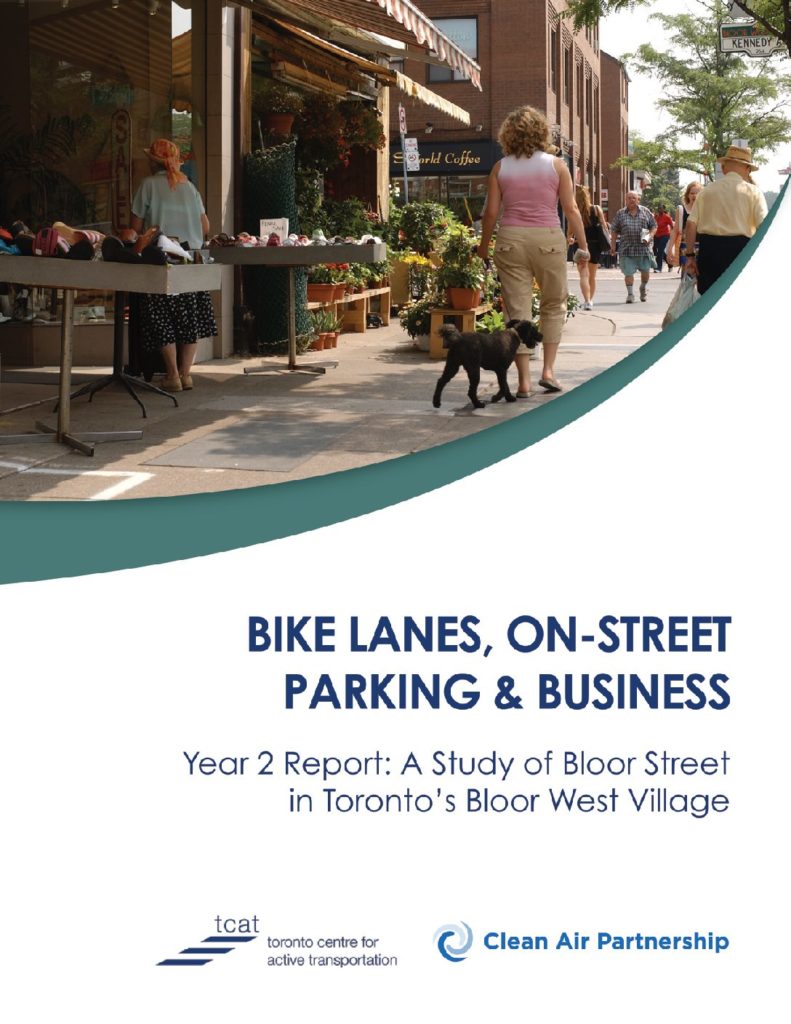 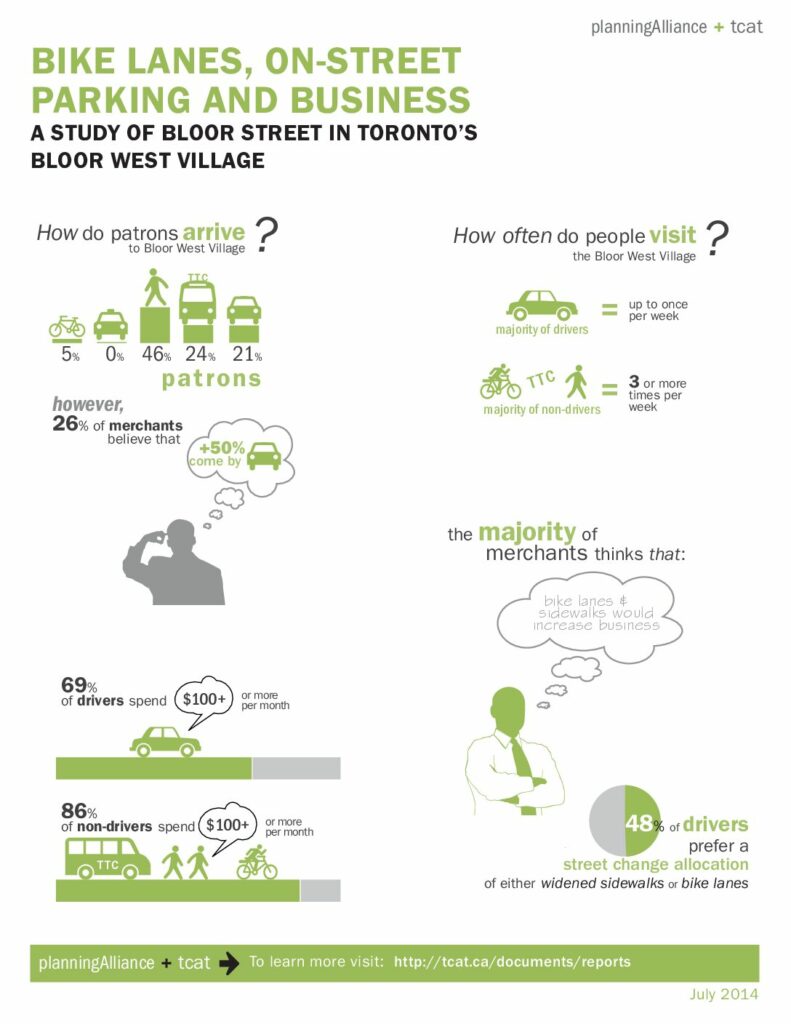 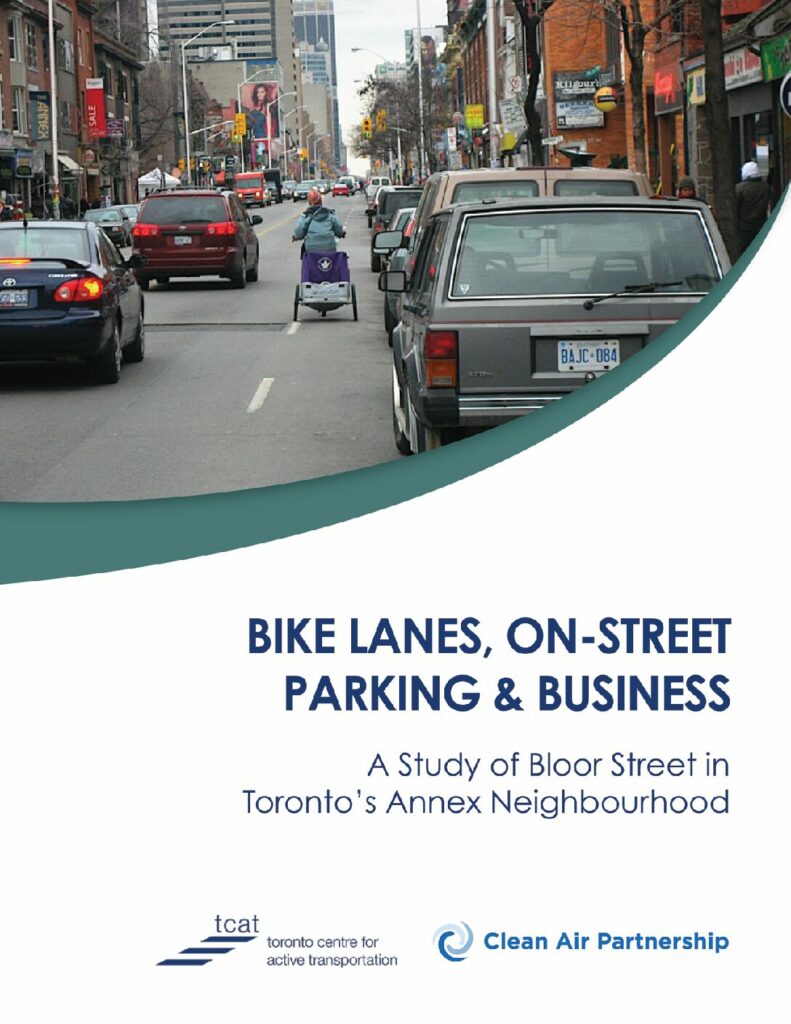 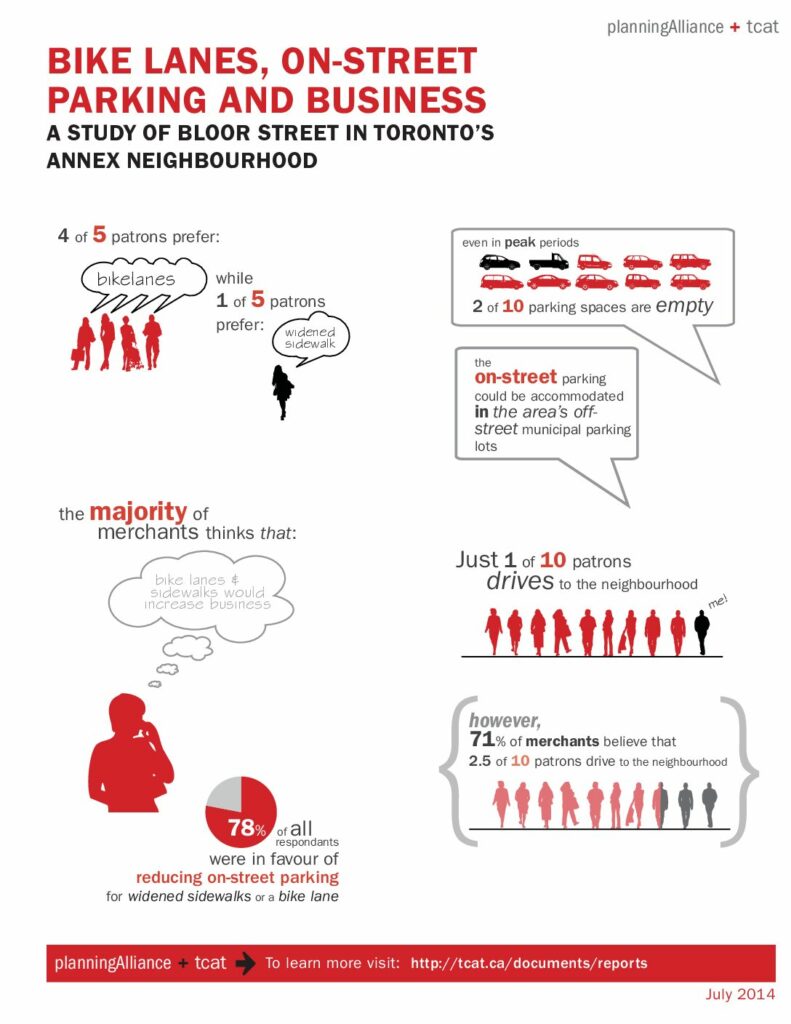