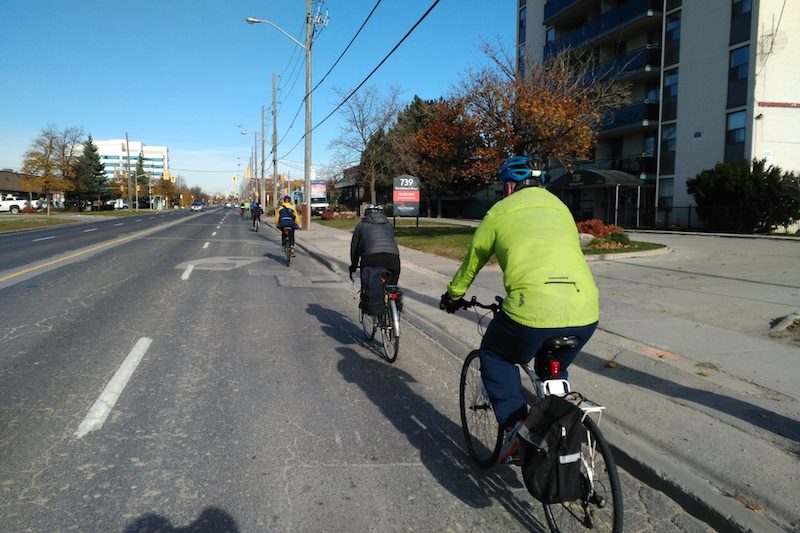 In our dreams of urban sustainability, we often picture beautiful, compact, human scaled, older neighbourhoods filled with people and activity. But many of our urban streets are machine scaled– newer, wider and filled with tall buildings and fast moving cars. We don’t yet have an image in our mind that transforms these kinds of transport corridors, into livable, human scaled spaces.

As part of developing their first ever transportation master plan, planners from Mississauga are reimagining how to transform streets built for cars into walkable, bikeable, transit friendly places. These challenging landscapes are the key to urban sustainability and intensification. To leverage the insights of many experts at once, Michelle Berquist, RPP, and Susan Tanabe, RPP, who are both planners with the City of Mississauga, hosted a ‘fishbowl’ session at the recent Ontario Professional Planners Institute Conference.

‘Get into our dreams; get out of your car’ was a standing room only session attesting to the intense interest planners have in this challenging transformation. Ideas came from many places including participants who had lived and worked in cities around the world. Ideas ranged from recapturing portions of road allowances (some of which are 45 metres) for infill development, to thinking about the space from building edge to building edge rather than just the road allowance. Other ideas including focusing on smaller scale points of entry for pilot projects and new types of residential/commercial zoning for housing backing onto arterials.

TCAT’s Trudy Ledsham attended the conference as part of the Scarborough Cycles project. Supported by the Metcalf Foundation, this four-year project seeks to build bike culture beyond downtown by creating new knowledge about cycling in the suburbs. Trudy spoke about Urban Intensification and Cycling: are they compatible and for who? Both urban intensification and active transport are key current urban planning strategies in suburban areas. Her research shows trips by people who live in apartments are only about half as likely to be by bike as similar trips by people who live in houses. Focus groups in Scarborough revealed that compared to people who live in houses, those in apartments lack safe, secure bike parking and fear for their personal safety, as well as the safety of their bike. Planning practices which place apartment buildings on arterial roads and bicycle infrastructure on quieter roads mean people who live in apartments in suburban areas lack access to safe cycling infrastructure. They speak of driving their families to quieter neighbourhoods to teach their children to bicycle. Ultimately, these challenges demonstrate that land use and transportation practices are intimately linked and need to be reimagined together.