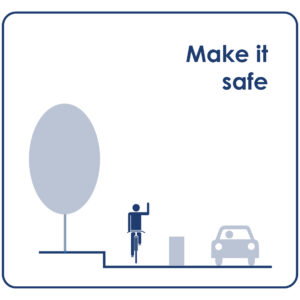 Many Canadian towns and cities witnessed a cycling infrastructure boom towards the late 2000s and early 2010s, and these communities are now seeing the results of that investment. Over the past twenty years, cycling has seen larger increases in places which have invested in on-street bicycle infrastructure. The top neighbourhoods for cycling in Canada in 2016 had almost four times more cycling infrastructure per sq. km than neighbourhoods with less cycling (Manaugh & Winters, publication pending). Additionally, a regular grid pattern of streets can supplement a dedicated cycling network by providing quiet, low-speed alternatives to the main road. Canadian cities and towns that have more four-way intersections have seen larger increases in cycling (Manaugh & Winters, publication pending). In places with circuitous street patterns, multi-use paths can provide more direct active transportation connections between neighbourhoods. The intensification of suburban neighbourhoods can present opportunities to incorporate more of these connections.

Explore the next action: Address Weather and Hills