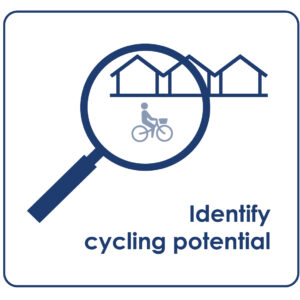 In suburban areas where few people currently cycle, the goal of increasing cycling can seem like a daunting one. Starting with a targeted approach in select neighbourhoods and expanding outwards is likely to be more effective than a broad, city-wide campaign. Mapping can be used to reveal differences between neighbourhoods and identify locations with a built environment and transportation patterns that are more conducive to cycling. In a study we conducted (Savan & Young, publication pending) of Toronto urban and suburban neighbourhoods, factors such as the percentage of short trips, the average number of daily trips per person, and the average number of vehicles per adult in a household were associated with changes in cycling rates. By mapping these factors in areas where cycling is low, we can identify neighbourhoods where conditions are more supportive for cycling and cycling programs and infrastructure may see greater success.

Explore the next action: Use partnerships to build cycling potential where it does not exist