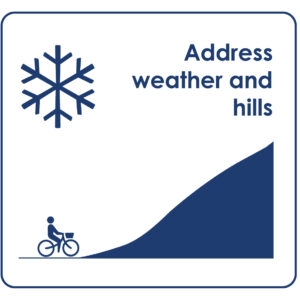 While cold, snowy weather and hills can make cycling challenging, some Canadian cities are successfully overcoming these obstacles. Metro Vancouver has a cycling mode share of over 2%, despite being very hilly. Greater Montreal and Ottawa-Gatineau are both at 2% or higher, despite each receiving an average of 54 days of snow a year and average January temperatures of -10°C. Winnipeg, despite being very cold, is almost entirely flat and has a mode share of nearly 2%. Halifax presents an opportunity, with cycling rates that are currently lower than Montreal, Ottawa and even Winnipeg, despite being considerably warmer and less snowy. Municipalities can address the challenges of hilliness and weather through a combination of infrastructure and programming to make cycling a more attractive option throughout the year for people of all fitness levels.

Check out our companion catalogue for more information on the cost of example projects and programs:
Costing of Bicycle Infrastructure and Programs in Canada