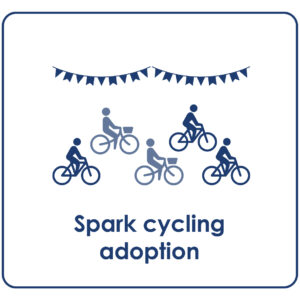 It is important that new or occasional cyclists are given the opportunity to try out cycling in a safe, supportive and fun environment. Examples include mass community rides where the road is otherwise closed to traffic or a bike-to-work day with a breakfast. These large-scale initiatives provide a compelling, public reminder of cycling and reinforce evolving social norms. For participants, the initial ‘ask’ is small and achievable, giving them a chance to experience success. They learn about their own abilities (‘I didn’t think I could bike that far!’) and discover the local cycling community. They may also make connections with neighbours or colleagues who cycle regularly. Organizers of these events can subsequently ask participants for a larger commitment, for example cycling to work for an entire month. Making a pledge to achieve a larger goal can generate excitement and catalyze action, particularly when done publicly.

A wide variety of programming can help people new to cycling sustain their behaviour, including organized community rides, cycling mentorship, community bike hubs, “do it yourself” bike repair, promotional packages, and small incentives. These programs can be tailored to attract specific groups who are currently underrepresented in cycling. In particular, there is a significant opportunity to grow cycling among girls and women. In Canada, 46% of men reported cycling in the past year, compared to only 34% of women. Women were less likely to have cycled in urban centres and were more likely to cite excessive traffic as a barrier to cycling.

Initiatives should strive to emphasize a welcoming atmosphere. Positive social connections based around cycling are critical to adopting and sustaining the change in behaviour. They help people stay motivated and provide opportunities for knowledge sharing, modeling and social reinforcements. Meeting other people who cycle, particularly from your own social group, also helps normalize the behaviour and make it feel less niche.