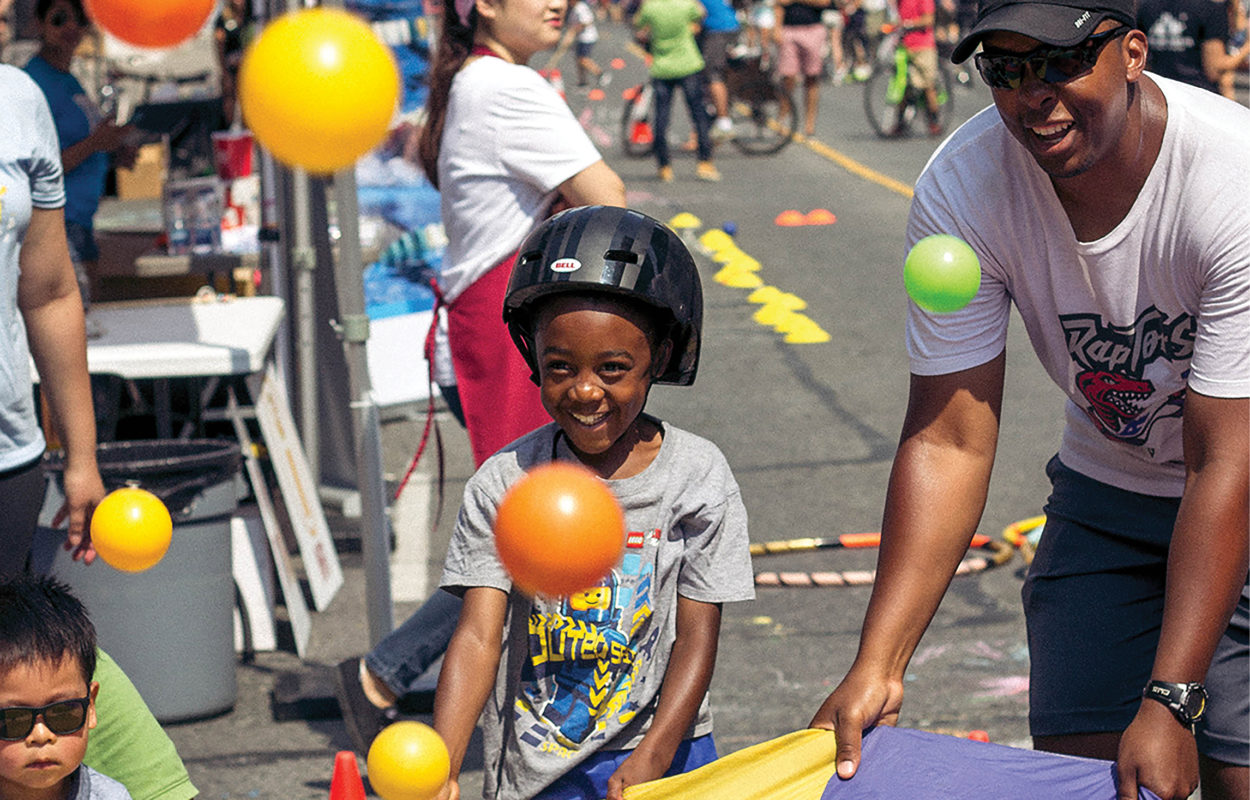 Only two out of every ten adults in Canada adults get enough exercise (Public Health Agency of Canada, 2016). The rest of us, seated at desks all day, behind the wheel of our cars every evening, and in front of Netflix at home, face serious health consequences because of our sedentary lives. Physical inactivity can shorten a life span by two and a half years – nearly as much as smoking.

At the same time, we are facing a crisis of community. More Canadians than ever are living alone and a quarter report being lonely. Social isolation is as bad for your health as smoking. To some degree, the problems of loneliness and low physical activity are related – the more time we spend shut indoors or shut in cars, the less opportunity we give ourselves to meet others and get to know our neighbourhood.

Open Streets is a simple, but profound initiative that addresses these issues. Very simply, we open the streets for a day to all of the fantastic public uses that it could be used for if it wasn’t dominated by cars. Dance lessons, demonstrations, yoga, and exercise classes are offered for free to anyone who wants to come out. The street becomes a temporary park, with space for people to bike or stroll and experience their city in a new way.

In June 2018, a coalition of Toronto community leaders released a set of 15 municipal actions for creating safe and active streets for all, called #BuildTheVisionTO. One of these actions is for Toronto to host a weekly Open Streets event from May to September.  Over the next few months, the coalition will be asking city council and mayoral candidates in the municipal election on October 22nd, to commit to this call to action.

Where did Open Streets come from?

Open Streets started in Bogotá, Colombia, more than 40 years ago, as a city-wide intervention to increase physical activity. Called Ciclovia, the event continues today and is the largest in the world. Every Sunday, 120 km of streets are closed to create a walking and cycling network that connects low, middle and high income neighbourhoods.

Since then, Open Streets has spread across North America. Over 150 cities – small, large, urban, suburban – have hosted one or more events. Ottawa has been hosting car-free Sundays for close to 50 years!

In Toronto, Open Streets was first proposed back in 2012 by City Councillor Kristyn Wong-Tam.  The original proposal would have seen Open Streets taking place once a month from May to October with a 20 km route. It took two years of advocating by the Councillor and grassroots volunteers to get the program off the ground, though the number of dates was reduced to two and the route substantially shortened. Despite the lack of dedicated funding from City Hall, Open Streets in Toronto is entering its fifth year of operations, having provided free, fully accessible recreation and joy to over 300,000 participants. The next Open Streets in Toronto are happening on Sunday August 19 and Sunday September 16, 2018.

The results are in! Benefits of Open Streets

As the Open Streets phenomenon has grown, researchers have evaluated its impacts, and studies have been published about events in Los Angeles, New York City, San Diego, St. Louis, and of course, Bogotá. These studies have found that nearly half of participants would have been inactive that day if they had not come to Open Streets (Cohen et al., 2015; Hipp et al., 2012). The majority of participants are able to meet guidelines for physical activity while at the event (Engelberg et al., 2014; Hipp et al., 2012). Moreover, significant increases in daily activity can stick for those who attend multiple events (Hipp et al., 2014).

Participants also point to the positive social environment and friendliness as highlights of the event (Hipp et al., 2014; Zieff et al., 2018). Many report noticing something new, such as a new shop or restaurant, while traveling the route, and say that the event has changed their feelings about their city in a positive way (Hipp et al., 2012).

Closing the street might spark concerns about traffic congestion and local businesses but  studies in other cities have found no significant traffic delays (Wolf et al., 2015), as events usually take place on a Sunday. The majority of participants report spending money along the route (Hipp et al., 2012), and businesses in Los Angeles, San Diego and San Francisco have reported an overall neutral impact, with restaurants and pubs in particular seeing gains (Engelberg et al., 2014; Chaudhuri & Zieff, 2015; Bronzen et al., 2016).

Dr Aaron Hipp, a researcher from St. Louis, writes that, “Initiatives open not only the streets, but also the eyes of participants to see their community in a new way.” With full street re-construction happening only once every 50 to 75 years, streets can seem static and unchangeable. By temporarily instituting a dramatic change, Open Streets pose the question, what if our streets were different? What if it were always pleasant to stroll along here? What if I could always bike here safely? Where would I go and how would my life be different? While a complete and permanent closure to cars is unfeasible in most situations, it is often possible to expand sidewalks and bike lanes if we can let go of a bit of car space. Such a bold step takes courage and creativity, on the part of local residents and from their municipal representatives, but Open Streets help us imagine what it would be like.

Any day now council and mayoral candidates will be knocking on your door asking for your vote on October 22nd. Ask them if they support Open Streets and the #BuildTheVisionTO campaign. And check back to the TCAT website to see all the candidates’ completed survey responses.