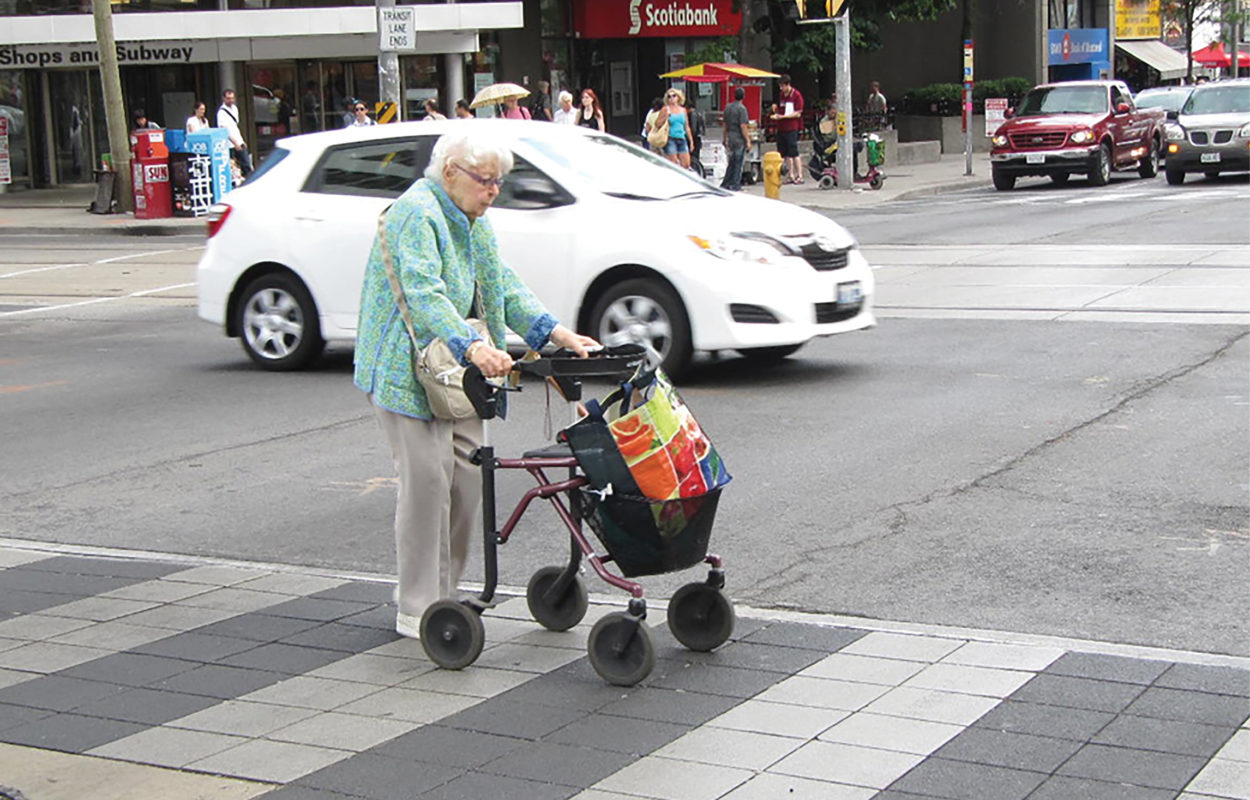 You’re stopped at a stoplight, waiting to turn right, looking left at the stream of traffic going by. Suddenly, you see a gap! You pull out quickly to join the flow – but did you look right first and check for someone crossing?

Priority #10 from #BuildTheVisionTO: Safe and Active Streets for All is to prioritize the safety of vulnerable road users by banning motor vehicle right turns on red. This practice creates a particularly dangerous environment, responsible for 13% of serious injuries and fatalities from walking-driving collisions in Toronto. Drivers filter through pedestrians who have a walk signal, while gauging the space available between cars traveling at full speed. This delicate dance relies entirely upon human behaviour to be executed safely. Eye contact with a driver might reassure someone walking that it is safe to cross. Or a person walking might see that the driver is looking the other way and about to turn, and might choose to walk behind the vehicle instead of in front of it.

Vision Zero does not rely on human behaviour to keep the roads safe, for the simple reason that humans make mistakes. The right-hand turn scenario is particularly difficult because the pedestrian has a green light telling them it’s ok to cross. A child might not understand the complexity of needing to double check anyways, a senior with reduced sight, hearing and movement might not notice the turning vehicle, and a blind person relying on the audible pedestrian signal has no way of knowing a vehicle is about to cross their path.

Since 2006, there have been 41 fatalities of pedestrians involving drivers turning right. Nearly a third of victims were 60 years old or older.

“Rights on red is a big issue for me,” says Daniella Levy-Pinto, a spokesperson for Walk Toronto who is legally blind. “I’ve lost count of the number of times drivers have sped to make their right turn as I start to cross, of course with the light. My dog has pulled me back.”

Where did this practice originate? Although it may seem commonplace to us in North America, where only a few cities like Montreal and New York ban right turns on red, we are actually out of step with much of the world. In Europe, most countries forbid it unless a specific signal or sign says otherwise, including Poland, Germany, Russia, the Netherlands, France, the Czech Republic and many others. The same is true for New Zealand, Australia, the UK, Ireland and Singapore for left turns on red, since they drive on the left-hand side of the road.

In the US, the move to permit turns on red was sparked by the OPEC oil crisis. The Energy Policy and Conservation Act in 1975 tied federal funds to a requirement that states permit the maneuver, and by 1980, every state had complied. Ontario followed a few years later, amending the Highway Traffic Act in 1984 to allow right turns after coming to a complete stop and yielding to pedestrians.

Following the change, a number of studies looked at the safety consequences. The Insurance Institute for Highway Safety found in the 1980s that collisions with people walking increased by 60% and with people cycling by 100%.  Another study of four states in 1982 found increases in collisions involving right-turning vehicles and pedestrians ranging from 40% to 107%.  Observations of drivers also revealed that over half failed to come to a complete stop before proceeding through the intersection.

Restricting these turn movements is a simple way to reduce conflicts between people walking and people driving. As a regulation, it’s in keeping with the goals of Vision Zero, by putting the onus of responsibility for safety where it belongs – on those who design the system.