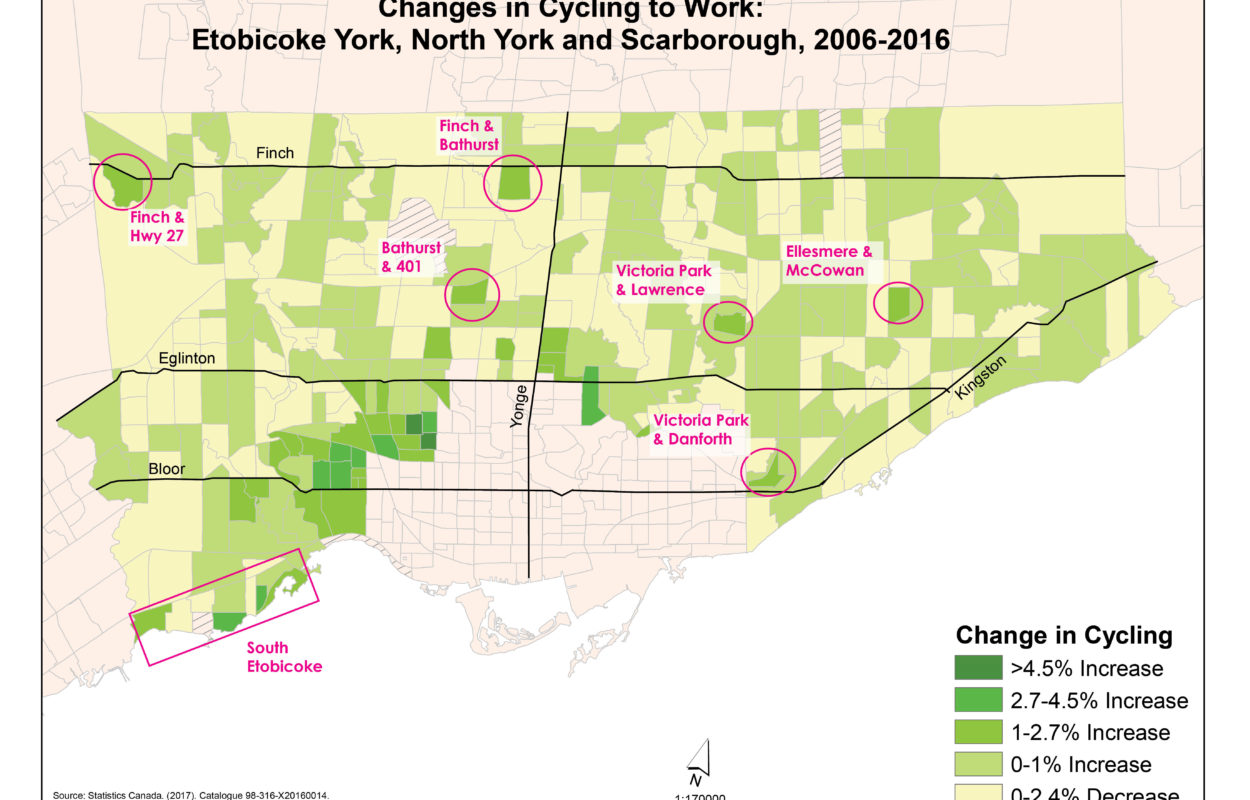 With cycling exploding in the downtown core, the suburbs can seem stuck in comparison. But this oft-repeated narrative ignores pockets of change that dot these car-centric landscapes. For Bike Month, we decided to map changes in cycling to work in Toronto’s three outer community council areas: Scarborough, North York and Etobicoke York, and try to determine why these pockets exist.

The map showed us a generally even split of slight increases or slight decreases in most census tracts, except for in York and a few places immediately north of downtown. Seven census tracts, though, saw cycling to work increase by closer to 3% over the past ten years. These pockets are spread across the city, sometimes surrounded by others that have increased, sometimes not. We asked ourselves, is there a pattern to these pockets which have seen an increase in cycling trips?

Getting Down to Work

The census asks only about travel to and from work or school. These trips represent only about 30% of the trips we make everyday, but outside of the downtown core, may be the trip that is more likely driven. You can probably bike to the library or the pool, but your office might be too far away.

These seven pockets of change in cycling represent an exception. Out of the seven sites, four of them are home to or close to a hospital. Two sites, Bathurst & the 401 and Ellesmere & McCowan, actually have two hospitals in close proximity. In Scarborough, Scarborough General and Centenary are even connected by the Gatineau Hydro Corridor multi-use trail. While we would not expect sick and injured people to arrive at the hospital by bicycle, hospitals are also major employment hubs. For example, Scarborough General has over 3,000 employees. Although none of these suburban hospitals have published employee commute data, the census would seem to indicate that they offer employment close enough to people’s homes to make cycling feasible. Interestingly, the major hospital which did not see an increase, North York General, is flanked by two expressways, which likely present a significant barrier to active commuting.

These hospitals might consider ways they can provide supports to encourage more of their employees to cycle. The University Health Network, located in the downtown, was recognized this year as a Smart Commute Platinum Workplace, the highest level possible. Strategies they have used to support cycling include creating a cycling master plan, providing over 1,000 bicycle parking spots as well as change facilities, and organizing a Bicycle User Group. The fact that people in North York and Scarborough neighbourhoods are cycling, even without such supports, indicates that there is potential for growth.

Students often get overlooked, but they are a significant source of commuting traffic. Toronto’s four universities alone have 175,000 students altogether. Suburban satellite campuses are becoming increasingly popular, and of the seven sites on our map, three are located near a post-secondary institution: the University of Toronto Scarborough Campus, and Humber College’s main and Lakeshore campuses. The Lakeshore campus in South Etobicoke also has the added benefit of being along the Waterfront Trail, and not too distant from downtown.

Both these institutions have sustainability offices that are working to encourage cycling among students. Programs include secure bike parking, bike repair stations, and Bike Share. UTSC’s bicycle fleet is maintained with help from our Scarborough Cycles project.

Two sites remain which do not have either a hospital or a post-secondary institution close by. They are Victoria Park and Lawrence, and Victoria Park and Danforth. While the first site remains a bit of a mystery, the second site, Victoria Park and Danforth, happens to also be the site of one of our Scarborough Cycles bike hubs, at AccessPoint on Danforth.  Extensive research went into the selection of these sites. Factors such as density of short trips, household car ownership, and available cycling infrastructure were used to identify neighbourhoods with the greatest cycling potential, so it is not surprising that this neighbourhood saw an increase in cycling. Data for the 2016 census was collected in May 2016, just one month before our bike hub opened, so its effect on local cycling rates would not be captured.

It is true that cycling faces additional barriers in the suburbs – everything from a lack of safe routes to a lack of repair shops. But it’s also the case that the suburbs is where the greatest potential for change exists. In Scarborough alone, there are nearly half a million trips made everyday which are 5km or less, a distance that can be easily cycled in 20 minutes. This map demonstrates another important truth for cycling: the suburbs are not uniform. In some areas, local factors will make it more or less feasible to bike. Places with high potential should be targeted with supportive programs to incubate cycling in what can sometimes be a hostile environment.