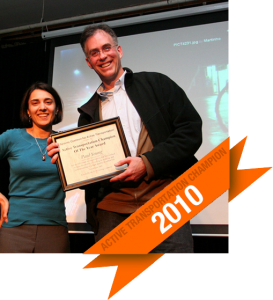 Last week the Toronto Bike Awards ceremony was once again co-hosted by the Toronto Cyclists Union and the City of Toronto. TCAT was pleased to hand out its second annual Active Transportation Champion award for an individual or organization that has worked to raise the profile of cycling or walking and its relationship to a high quality of urban life.

The winner of the TCAT award this year went to Paul Young, Health Promoter at the South Riverdale Community Health Centre. TCAT gave the award to Paul for several reasons:

Thanks for all you do Paul!