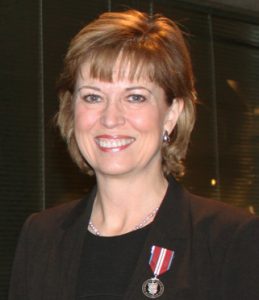 Since being elected to Town Council in 2010, Councillor Pam Damoff has become a political champion for cycling and walking. The recipient of the 2013 Bicycling Leadership Award from the Share the Road Cycling Coalition for promoting bicycling in Ontario, Councillor Damoff is extremely proud of Oakville’s 2012 Bronze Bicycle Friendly Community Award. As the founder of Cycle Oakville, she has implemented a number of community initiatives to encourage residents to cycle more often.  She was instrumental in implementing the highly successful bike valet parking for the 2013 RBC Canadian Open in Oakville. Councillor Damoff has been actively working with the three Business Improvement Areas to encourage them to become bicycle friendly. A two-year pilot will begin in 2015 that will see on-street bike corrals in the business districts. In May 2014, Oakville became the first municipality in south-central Ontario to carry the CAA “Watch for Bikes” decal on the side mirrors of all of its non-emergency vehicles and launched an extensive bicycle safety campaign. The town has an approved Active Transportation Master Plan and currently has a network of cycling routes consisting of on-road cycle lanes, paved shoulder bikeways, signed bike routes and multi-use trails. Dedicated funding for active transportation infrastructure would help Oakville grow their network beyond the over 105 kilometres of on- and off-road cycling paths and the over 150 kilometres of trails that currently encourage people to walk and cycle. Councillor Damoff sees the health, environmental and economic benefits of active transportation, and feels it is of critical importance to the residents of Oakville and the Region of Halton.