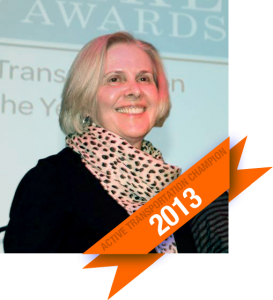 The 2013 Toronto Bike Awards were held on November 26, at the Gladstone Hotel where TCAT was pleased to present its fifth annual Active Transportation Champion Award to Dr. Monica Campbell, Director of Healthy Public Policy at Toronto Public Health.

Dr. Campbell has city-wide responsibility for ensuring the development of evidence-informed public policies that best protect the health of Toronto residents. She was selected by a majority vote of the TCAT steering committee for her leadership in demonstrating the link between active transportation and health and for spearheading numerous evidence-based initiatives within Toronto Public Health to improve the safety of cyclists and pedestrians in Toronto.

Under the influential leadership of the Medical Officer of Health, Dr. David McKeown, the Healthy Public Policy Team regularly produces exceptional reports, including:

About TCAT’s “Active Transportation Champion Award”:  Each year TCAT presents an award to an individual or organization that has worked to raise the profile of cycling or walking and its relationship to a high quality of urban life. Our previous award winners are Jane Farrow in 2009, Paul Young in 2010, Paul Hess in 2011, and Patrick Brown and Albert Koehl in 2012.