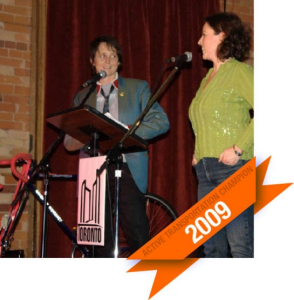 The founding Executive Director of Jane‘s Walk, Jane Farrow, received TCAT’s inaugural Active Transportation Champion award in 2009.Jane‘s Walk’s mission is to develop urban literacy and a community-based approach to city building by encouraging citizen-led walking tours that make space for every person to observe, reflect, share, question and collectively reimagine the places in which they live, work and play.The organization is named after the urbanist Jane Jacobs, and its annual walking tours are meant to encourage people to explore and learn about their neighbourhoods and neighbours.

During her time as leader of Jane‘s Walk from 2007 to 2011, the organization expanded from a handful of tours offered in Toronto into a global phenomenon. TCAT gave Jane the award during the initial growth spurt, in the first year that that the walks expanded out of Toronto’s downtown core and into the inner suburbs.
Jane Farrow was also the co-author, with Dr. Paul Hess, of the Walkability in Toronto’s High Rise Neighbourhoods. This walkability study, the first of its kind in  North America, involved community-led examinations of walking conditions in eight Toronto high-rise neighbourhoods, seven in the inner suburbs and one in the core.
(Image: Jane Farrow, Executive Director of Jane‘s Walk on left & Hannah Evans, Board Member, Centre for City Ecology on right)