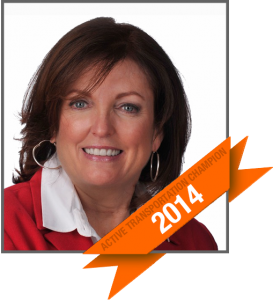 Eleanor McMahon is the founder of Share the Road Cycling Coalition, and an internationally recognized cycling advocate. As CEO of Share the Road from 2008 to 2014, Eleanor brought the successful Bicycle Friendly Communities award program to Ontario, organized numerous regional and provincial Bike Summits and rides across the province, and delivered compelling and hard-hitting advertising campaigns about sharing the road and truck safety.

In 2012 Eleanor worked with Transportation Minister Glen Murray to bring together a coalition of organizations to develop the first bicycle policy update in Ontario in 20 years.  Share the Road’s “Green Paper on Bicycling in Ontario: When Ontario Bikes, Ontario Benefits” released in 2010 created the framework of the policy. In August 2013 the Ontario Bicycle Strategy, #CycleON, was launched.  Eleanor was a member of the Minister’s working group charged with developing Action Plans to deliver on the Strategy’s initiatives. These include changes to the Highway Traffic Act and active transport funding for municipalities. On April 14, 2014 the province announced a $25 million 3-year funding commitment to improve existing and build new cycling infrastructure.

On June 12, 2014 Eleanor was elected as an MPP to represent the riding of Burlington.

On October 21st, 2014, as a direct result of Eleanor’s successful advocacy efforts, the Government of Ontario introduced the Safer Roads Ontario Act that represents the most significant change to the HTA in decades with a specific eye to improving cyclist and pedestrian safety.

Eleanor McMahon leaves an incredible legacy of work through her time at Share the Road Cycling Coalition. She is an inspiration and role model for so many of us working in this field. She is a dynamo and a passionate, talented and articulate advocate for cycling. Ontario has progressed leaps and bounds in the cycling agenda since she turned her attention to this issue.