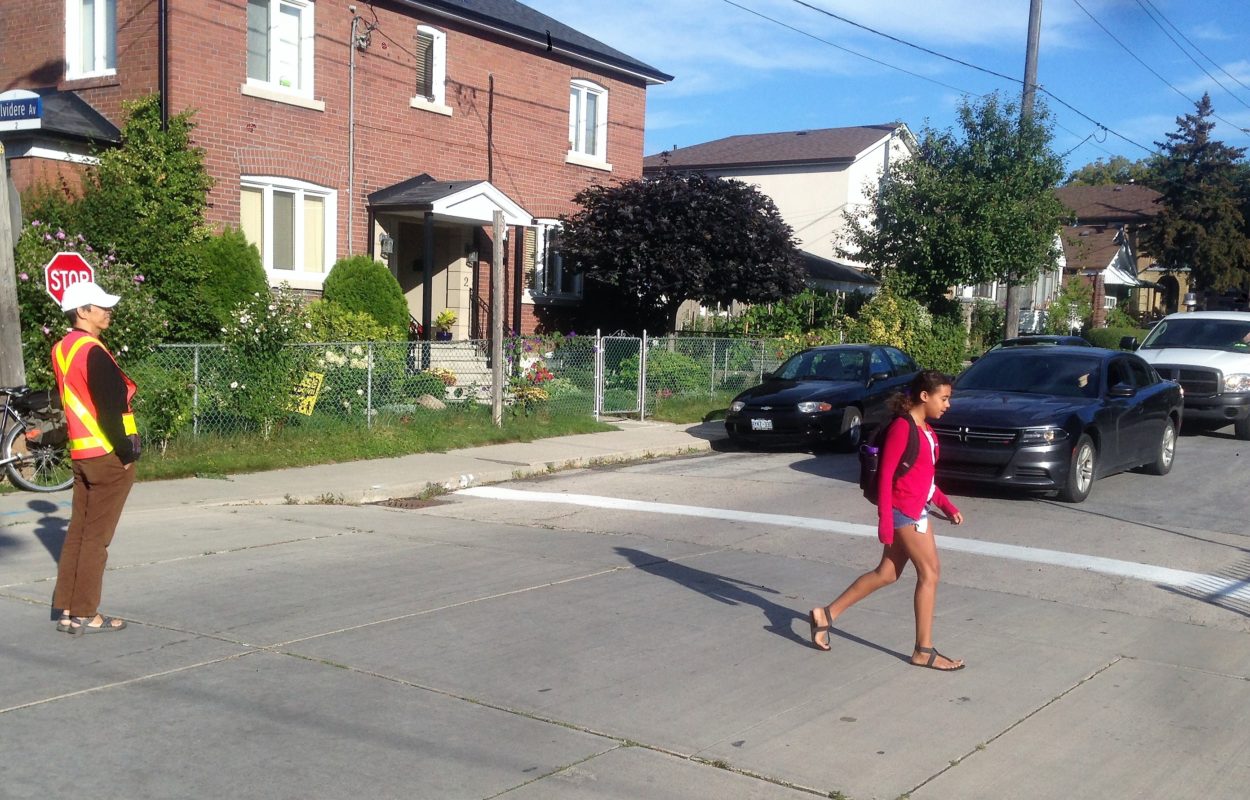 Walk? Bike? Bus? Or drop-off? With September here, students are heading to school again each morning, and how they get there can have a big impact, with active travel choices coming out ahead for physical and mental health, independence and the environment.  However, rates of walking to school have taken a nose-dive over the past 30 years, dropping by 12% in the Greater Toronto and Hamilton Area between 1986 and 2011, while the number of students who are driven has more than doubled.  A major factor contributing to the decline is street safety.  Many a parent council meeting has digressed into stories of near-misses and aggressive drivers raging at kids in crosswalks in their rush off to work.  Parents report witnessing children, barely visible over the hood of your typical SUV, narrowly avoiding being hit by a commuter, or worse, by another parent looking for curb-space to drop off their own children.

Parent councils have become a key voice advocating for change.  Many of these parents and guardians want their children to experience walking to school independently, as they themselves did when they were young, and they refuse to accept unsafe conditions as inevitable.   JR Wilcox Community School is no exception.  Faced with an influx of vehicles due to the Eglinton Crosstown construction in a neighbourhood that already receives heavy traffic from the south end of the Allen Expressway, its parent council took up the issue of road safety a year and a half ago.  In a letter to their two local councillors, they outlined their concerns, including speed limits, school crossing signage, crosswalk paint, and vehicles turning right on a red light.  So far, their efforts have resulted in a new crossing guard and new zebra crosswalk markings are coming soon.

They also invited local councillors to “walk to school with us” to understand concerns from a “street-side perspective”.  Councillor Joe Mihevc took them up on the offer and his office has been coordinating with City departments to chip away at the parents’ list of safety concerns.  “We know the streets,” says Gillian Kranias, a volunteer on the parent council. “We walk them everyday with our children, and we are aware of the danger spots.  It’s important for the City to tap into that knowledge, to be able to make changes where they’re needed.”

Working with politicians, school board trustees, and City departments can be intimidating.  The parents at Jr Wilcox had some experience with these processes already, but not every school is that lucky.  Last year, The Centre for Active Transportation (TCAT), along with a number of other non-profit organizations, Toronto Public Health and TDSB’s Eco Schools program, released the Guide to Safer Streets Near Schools.  This invaluable support resource for school councils continues to grow in use.  It provides examples of different types of road safety measures (speed humps, curb extensions, chicanes), explanations of the City procedures for requesting these, and a toolkit of sample letters, petitions, educational materials and worksheets. “The City relies on parents and other residents to identify dangerous streets and to make requests to improve safety, but it’s not easy to navigate through the system to make change happen,” says TCAT Director Nancy Smith Lea.  “We created the Guide to make these processes more accessible to residents across the City.”

While change is happening, progress is often slow.  Parent committees are entirely volunteer-run and most members have full time jobs, in addition to child-raising responsibilities.  The parents at Jr Wilcox fit in their safe streets work whenever they can, often late at night and sometimes with gaps of months. But Gillian advises parent volunteers not to be discouraged. “We just pick up where we left off and plug away at our list of safety goals. The satisfaction comes from knowing that each little change is long-lasting and protects our most vulnerable road users.”