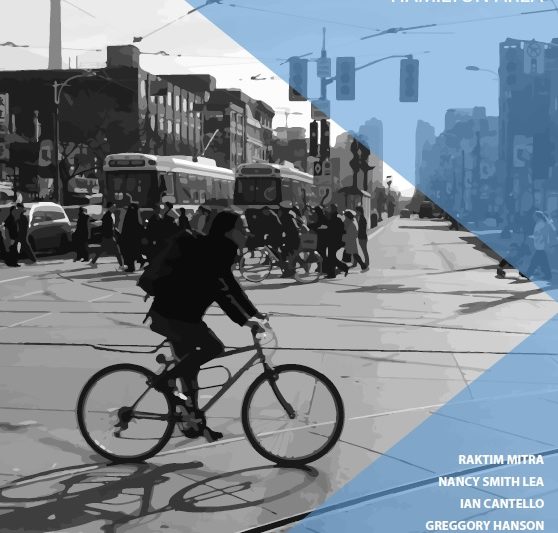 TORONTO, October 11, 2016. The Centre for Active Transportation (TCAT) is pleased to announce the release of Cycling Behaviour and Potential in the Greater Toronto and Hamilton Area, a new report led by Ryerson University in collaboration with TCAT that finds very high potential across the region for shifting over 4 million trips from motor vehicle to bicycle.

“We know that the popularity of cycling in downtown Toronto is growing exponentially, but our findings indicate there are critical opportunities to improve both policy and practice to support cycling across the entire GTHA,” said Raktim Mitra, Principal Investigator and Professor at Ryerson University’s School of Urban and Regional Planning.

“If only one in five (20%) of the trips that we identified as cyclable trips were actually cycled, that would take 716,000 cars off GTHA streets every day. It would also contribute to a significant reduction in congestion and green house gas emissions, and make a major improvement in physical activity levels among GTHA residents,” Mitra added.

The researchers examined current patterns of cycling in the GTHA, quantified cycling potential in the region and indentified areas with high propensity for cycling. A potentially cyclable trip is defined as a trip where:

GTHA residents take 14 million trips every day. The majority (63%) of these trips are short trips less than 5 kilometres, and yet, only 6% of these short trips are currently either walked or cycled. In comparison, 4.35 million trips within the GTHA can be considered potentially cyclable trips, which is one-third (i.e., 33%) of all trips that are not currently taken on foot or a using a bicycle.

“While current cycling rates in many suburban municipalities in the GTHA remain low, our research has found that there is high potential for increasing cycling for transportation outside of the downtown core,” noted Nancy Smith Lea, Director of The Centre for Active Transportation (TCAT), a collaborator on the report.

Other key findings from this report are:

The report is a collaboration between Ryerson University’s TransForm Laboratory  and the The Centre for Active Transportation, with funding from Metrolinx, an agency of the Government of Ontario.