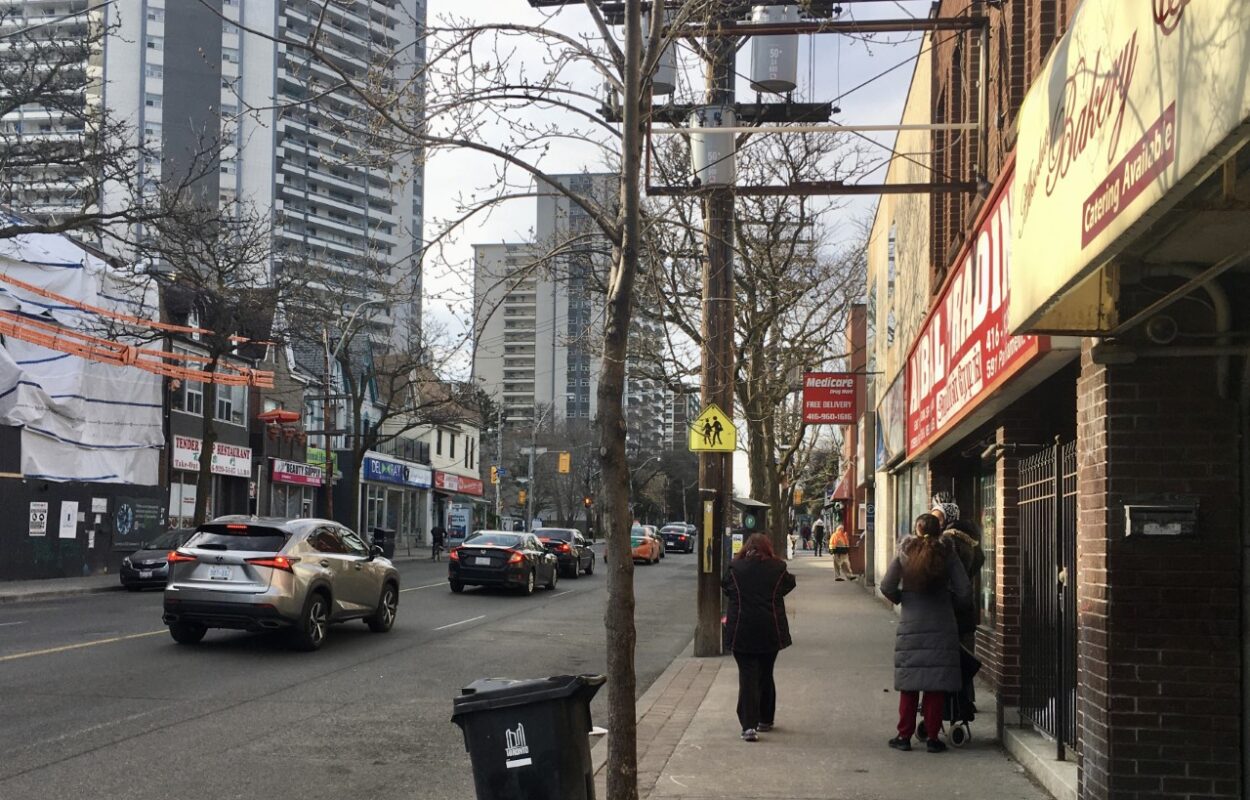 “I haven’t been on a bike in years, and this will help so much!” These were the words of Jessica, an addiction services worker, who recently received a refurbished bicycle as part of the Big Bike Giveaway initiative in London, Ontario. This program, which usually provides residents in need with bicycles at a fall event, has switched gears in order to give them away now to low income essential service workers who need a way to get around during the Covid crisis.

Staying Home is a Luxury

At The Centre for Active Transportation (TCAT) at Clean Air Partnership, we closed our office on March 13th, over five weeks ago. Since then, staff have been emailing, video-calling, and plain old telephoning from our kitchen tables. According to Google’s Community Mobility Report, most Ontarians have been doing the same. Trips to workplaces are down 48%. Surprisingly, even trips to grocery stores and parks are down, by 9% and 20% respectively. Our public health officials are reporting that this strategy of staying at home is effectively working to curb the virus.

Yet what these numbers also tell us is that, despite the closure of so many services, many Ontarians continue to commute to work. Drs. Anne Harris and Linda Rothman, epidemiologists at Ryerson University, estimate that there are still nearly one million trips outside of the home taking place in Toronto everyday. This includes healthcare workers, grocery store clerks, pharmacy staff, restaurant staff, utility workers and more, who expose themselves to the risk of contact everyday to keep essential services running. We applaud the efforts of these frontline workers with pot-banging and cheers during our nightly salutes.

Travelling in a Covid World

But what does this daily trek look like in a Covid world? Google’s numbers tell us that it’s less likely to be taking place via transit – trips to bus and train stations are down by 62%, greater than the reduction in trips to workplaces. Transit agencies across the province have reduced their service levels in response to lower ridership, and at least one has shut down entirely.

Reminiscent of the 1918 pandemic, the bicycle is an increasingly viable option for people to get around while maintaining physical distance. As restrictions on movement are gradually lifted in China, data is revealing that cycling has increased dramatically. Bikeshare systems in Beijing, for example, have seen ridership grow by 150%.

Even before Covid-19, walking and cycling made up a larger proportion of trips in Toronto than many people realize. According to the 2016 Transportation Tomorrow Survey, 13% of utilitarian trips (e.g. to work, school, shopping, etc.) relied on walking and cycling. A further 27% of trips were made by transit, which as Dr. Harris and Dr. Rothman point out, likely includes walking to reach a transit stop. Even higher levels are found in the downtown core, meaning that pre-Covid, between 40 and 68% of daily trips in Toronto relied on walking or cycling for at least a portion of the journey.

Health experts have given clear guidance that if we need to go out in public, we should maintain a two-metre distance from others. Cities are now grappling with the fact that sidewalks are less than two metres wide. As Daniel Rotsztain’s Social Distance Machine viral video brilliantly demonstrates, add in a lamp post, a transit stop, or a queue of people waiting to enter a store, and maintaining two metres of space quickly becomes impossible, unless you step off the curb and walk in the road.

In many cities around the world, people walking and cycling are now being invited to do exactly that. With fewer cars traveling on the roadways, cities are closing curb lanes to cars and creating additional, temporary spaces to help cyclists and pedestrians maintain their distance.

Bogotá has led the way by installing 35km of temporary bike lanes using cones, in a network that mirrors their bus rapid transit routes, to provide an alternative to transit. Budapest is reporting a reduction in motor vehicle traffic of 50% and an uptick in cycling, and is using this opportunity to rapidly deploy bike lanes along major, multi-lane roads. In Oakland, California, officials recently announced a plan to restrict motor vehicles on 74 miles of neighbourhood streets, opening them up as “slow streets” for pedestrians, cyclists and families to play outside. Tabitha Combs, a lecturer at the University of North Carolina, has started a crowd-sourced database to track these initiatives and has collected over 100 international examples.

Closer to home, Vélo Canada Bikes has started a national list to keep track of which cities have (and have not) taken action. So far, Calgary, Edmonton, Winnipeg, Vancouver, Montreal, Kitchener, and Brampton are among the cities that have closed all or part of a street to give people walking and cycling more space.

A Chance to Re-Define?

As cities in other parts of the world begin to emerge from lock-down, some are choosing to view it as a chance to re-define. Milan, in Italy’s hardest-hit province of Lombardy, has announced an ambitious plan of transforming 35km of its streets over the next few months, using rapidly deployable materials to significantly expand walking and cycling space. The city, once one of the most polluted in Europe, saw both car use and air pollution drop by 30-75% under lockdown. Poor air quality has been tentatively linked to the high rate of deaths in the region, but in addition to healthier air, city officials are motivated by the economy, saying that liveable cities that still have a vibrant restaurant, artisan and entertainment scene will have an advantage after Covid.

The Bicycle as a Tool

In Ontario, London, like other cities, has increased space for pedestrians and cyclists by partially or completing closing two key bridges to motor vehicle traffic, but it is perhaps unique in its community-led initiative to give bicycles away to low income frontline workers. The testimonials from those receiving bikes are not that different from those we often hear at our suburban community bike hubs, where we loan bikes and help people fix up their own bikes and re-discover the joy of riding.

Many cities are recognizing that bicycle ownership is a gap. In addition to providing safe spaces, they are also increasing access to bikes. Budapest and Portland have drastically reduced the cost of their bike share passes. Washington, DC and Chicago are offering a free bike share pass for essential workers, and Berlin and Austin, Texas have made bike share entirely free. A group of volunteers in Toronto are using bicycles to deliver food and medical prescriptions to people isolating at home.

The health and economic challenges facing us are enormous, but small actions can have a big impact. Affordable access to a bicycle, or pylons to turn an under-used curb lane into an expanded sidewalk, or deactivating “beg” buttons – these things won’t solve the crisis, but they will make weathering this storm easier, safer and more equitable.

To dive deeper into the question of how and when to re-balance streets, TCAT has teamed up with Share the Road Cycling Coalition and is hosting a conversation on Making Space for Physical Distancing in Ontario (Wed Apr 22, 3pm EDT). Participants will hear from Dr. Anne Harris, an epidemiologist from Ryerson University who recently co-wrote a letter of support for rebalancing streets and making more space for sidewalks and for cycling. Representatives from Brampton, including Councillor Rowena Santos, will also be sharing insights from the street rebalancing initiative currently underway there – one of the first in Ontario. Lastly, participants will be invited to participate in an initiative to co-develop a set of key questions for planners and advocates to use while rebalancing streets.