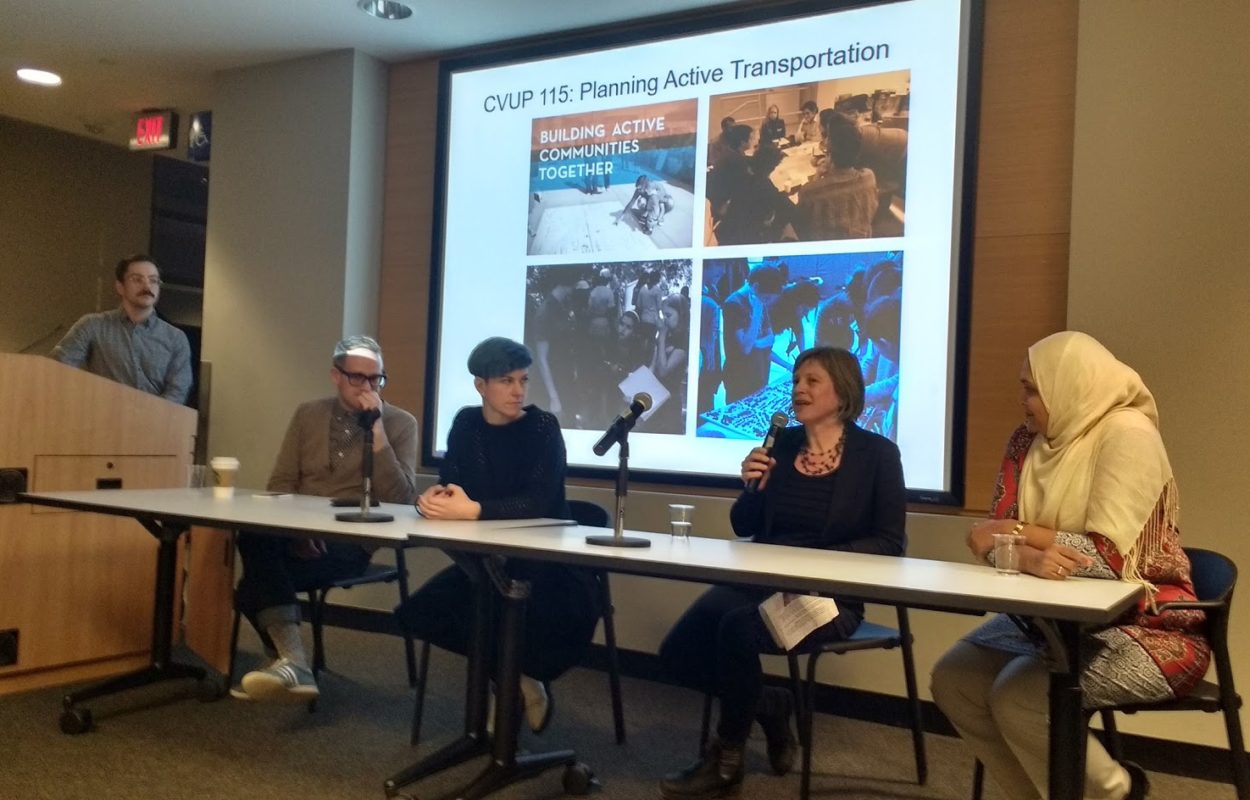 “Streets should be compelling and beautiful.” That was the message delivered at Ryerson’s Chang School for Continuing Studies by Car Martin, TCAT’s Participatory Design Consultant and soon-to-be co-instructor of our new course, CVUP 115 Planning Active Transportation. This first-of-its-kind 7-week course, set to start March 22nd, is focused on co-design techniques and how they can be used to meaningfully involve community members in re-imagining their neighbourhoods to be more human-scaled and active transportation friendly.

Last week’s well-attended launch event included a panel of celebrated Torontonians, including Shawn Micallef, Toronto Star columnist and co-founder of Spacing magazine, Sabina Ali, founding member and chair of the Thorncliffe Park Women’s Committee, and our own Nancy Smith Lea. The panelists spoke about their experiences exploring and changing Toronto.

Sabina described arriving in Thorncliffe Park in 2008, from India, and discovering a close-knit community with the highest population of children in Toronto, but a deserted playground. “It was just dirt and full of garbage,” she says. “I couldn’t believe this was a park in Canada.” She started talking with other women, organizing and gathering informal input into what the community would like to see. Today, the park boasts a new playground, splash pad, community gardens, art programs, markets, a winter carnival, and North America’s only public tandoor oven, thanks in large part to Sabina’s tireless efforts campaigning the City and filling out endless permit applications.  As TCAT’s Car Martin put it, “residents are experts on what their neighbourhood needs, and their knowledge needs to be treated the same as professional designers and planners at the table.”

Shawn described the joy of exploring Toronto’s many diverse neighbourhoods on foot, and noted that successful cities move at a walking pace. Raised in Windsor where it felt natural to drive everywhere, he said of moving to Toronto, “For the first time, I didn’t have a car and I felt a lightness.” He noted, though, that Toronto’s neighbourhoods are not equally suited to walking, and many people living on the peripheries are isolated in wards that it would take the entire day to walk across.

Nancy talked about TCAT’s Scarborough Cycles work, which is addressing some of these transportation and health inequities in the inner suburbs by providing people with another way to get around. The project has opened up two community bike hubs in Scarborough, which offer DIY bike repair, access to bicycles, mentorship, group rides, civic engagement and youth build-a-bike programs. All these activities help incubate a nascent cycling culture in the suburbs, and support those people, newcomers in particular, for whom cycling is their primary means of transportation. Hyper-local, this intervention seeks to change the city, one neighbourhood at a time.

Whether rambling, fixing bikes or building a park, the common scale that tied the panelists’ stories together was the neighbourhood. Their experiences spoke profoundly about the value of resident knowledge and local citizen action to change the status quo. TCAT’s Active Neighbourhoods team has been using these same principles to re-imagine and co-design streets and public spaces with communities across Ontario over the past four years, and the collected learning of these pilot projects form the basis of our new course.

Registration is now open, we hope you can join us!