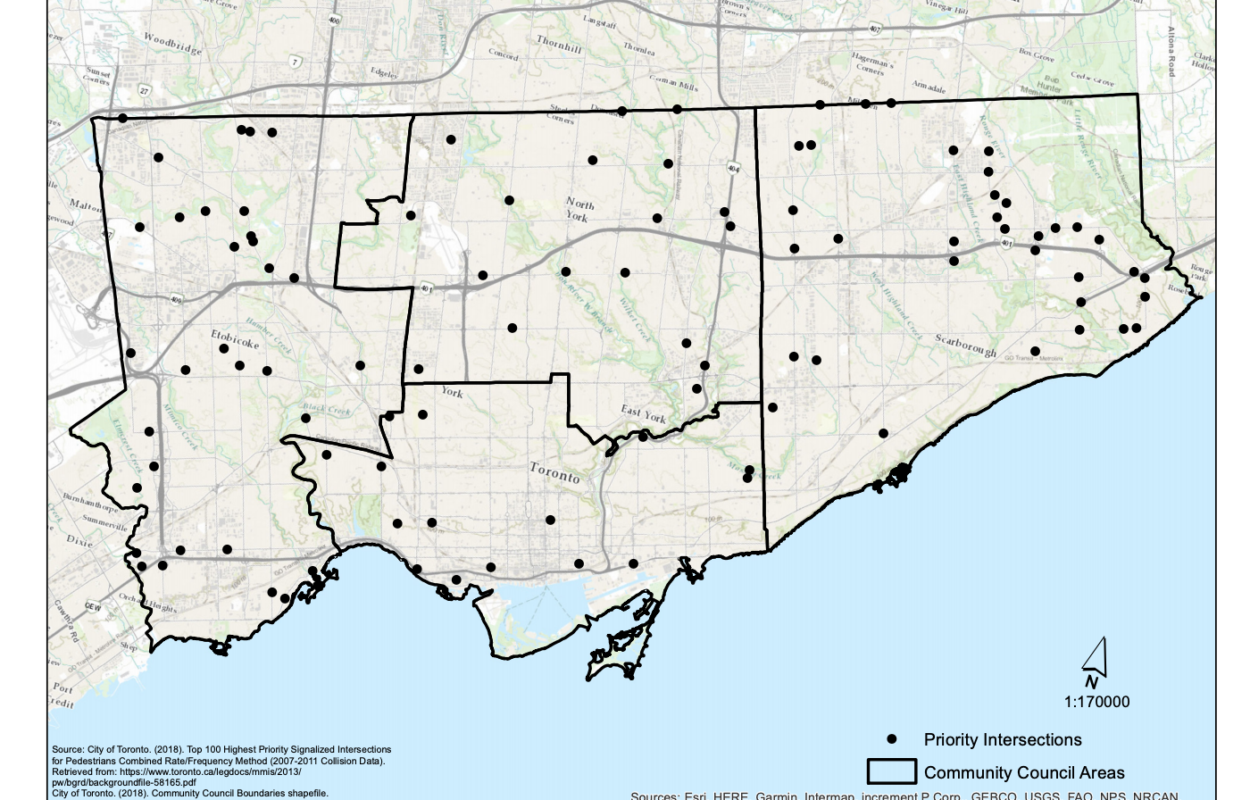 A new map created by TCAT of 100 priority intersections for pedestrians in Toronto provides a stark visual representation of how much more dangerous our suburban areas are compared to the city’s more walkable downtown.

The map was produced using City data found within a 2013 report jointly issued by the City of Toronto’s Traffic Safety Unit and Pedestrian Projects Unit. The City’s report was released following an earlier Global News Network story that revealed that Toronto’s most dangerous intersections for pedestrians are primarily in the suburbs. The news agency report was useful to raise awareness about pedestrian safety but their analysis used an “accident ratio” methodology which had several shortcomings. As a result, City staff subsequently produced their top 100 list using a more robust methodology of a combined collision rate/frequency method.

Since the 100 priority intersections were released by the City as a list only, TCAT volunteer Benjamin Waters dug in and mapped them out according to their community council area location. He found that 84% of Toronto’s most deadly intersections for pedestrians are located in the suburban communities of North York (18), Etobicoke (31), and Scarborough (35). Walking is the healthiest, most affordable, and inherently the safest form of transportation, so it is critical to understand and address the factors resulting in these lethal collisions.

The Mayor’s recent announcement, then, regarding the City’s upcoming “Vision Zero 2.0” plan is important. The revised road safety plan, expected to be considered this June by the Infrastructure and Environment Committee, examines factors involved in serious injuries and fatalities, including speed, road design, and distance between protected crossings. The City’s new analysis confirms their earlier report that found that intersections in Toronto’s suburbs are the deadliest for pedestrians. Scarborough, in particular, continues to have the highest ratio of fatal pedestrian collisions, and the City’s new analysis finds that it also the area of the city with the most high-speed arterials roads.

Walking is a fundamental right. People walking in the city’s suburban areas deserve the same right as their downtown counterparts to safe streets. This is a social justice issue. According to new research  from our Active Neighbourhoods partner in Calgary, study after study has found that pedestrians in lower-income areas are more at risk than their counterparts in more affluent areas.

We have designed our cities in a way that puts our most vulnerable road users at higher risk. We have a moral imperative to turn that around and rebuild streets and intersections so that all Torontonians, whether in or outside of the downtown, arrive home alive.