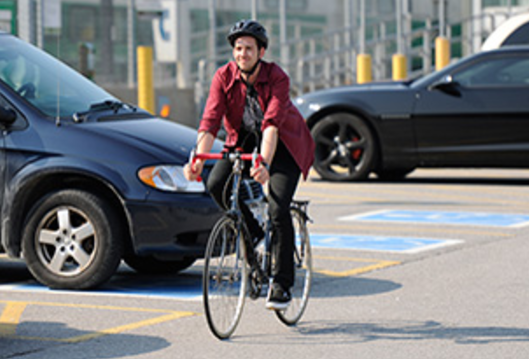 At a press conference last month announcing upgrades to more than 40 GO Transit stations across the Greater Toronto and Hamilton area, Transportation Minister Steven Del Duca said the province was on route to creating a “modern, integrated, and sustainable transportation network” where new secure bike parking “will make it easier than ever for cyclists to use GO Transit.”

Research by TCAT and Ryerson University last year showed that 66% of current GO users live within 5 km from a station, which is an easily bikeable distance, and yet 43% of GO users drive. The study estimated that one in every five trips to and from GO stations could comfortably be cycled, and yet virtually none of these trips currently are, representing a significant untapped opportunity.

Why the preference for four wheels instead of two? The availability of parking is partly to blame, as it discourages travel by other modes. Behavioural research has shown that the provision of free or heavily discounted parking at the workplace is one of the key reasons why commuters decide to drive to work, even when transit alternatives are available (see our Cycling Behaviour and Potential in the GTHA report). Parking at transit stations, however, is still being expanded. According to Metrolinx, since 2008, 19,000 spaces have been added to GO stations, making it the single largest provider of parking in North America. TCAT and Ryerson University, in their joint response to Metrolinx’s Discussion Paper on the next Regional Transportation Plan, recommended that Metrolinx discontinue the practice of offering free parking or offer a discounted ticket price to those customers who arrive by other modes.

Another barrier is the widespread lack of pedestrian and bicycle-friendly infrastructure. Some headway is being made in this area: the next round of GO station upgrades will include secure bike parking, and the recently announced Bike Share Toronto expansion targets subway and streetcar stops. Presently, however, in order to accommodate the thousands of cars driving to GO, access at many stations for cyclists and pedestrians is unsafe, unpleasant and inconvenient. As well, only 2% of roads in the GTHA have bike infrastructure (see our Cycling Behaviour and Potential in the GTHA report).  More protected bike lanes and better wayfinding to stations will involve a high level of municipal, regional and provincial cooperation. TCAT and Ryerson University recommended to Metrolinx that all future transit capital projects include active transportation integration in their budgets.

There is significant support in the updated Growth Plan for the Greater Golden Horseshoe (2017) for action in this area. The Plan calls for the integration of active transportation and public transit by requiring that transit station areas include “infrastructure to support active transportation, including sidewalks, bicycle lanes, and secure bicycle parking” (2.2.4.8). Hopefully in the future, the first and last mile problem will be nothing more than a walk in the park or a ride on a bike.