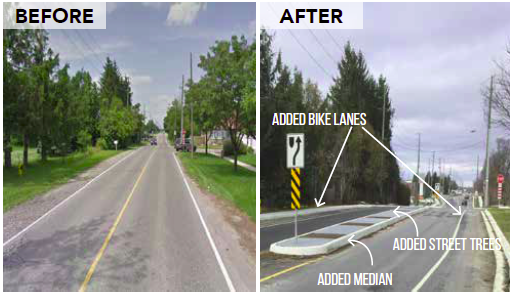 Photo of Garden Ave in Brantford, Ontario, before and after the implementation of Complete Streets

This month last year, the Ontario government released its new Growth Plan for the Greater Golden Horseshoe. Included in it was a directive that all municipalities adopt Complete Streets policies.

The Growth Plan covers the entire Golden Horseshoe region, from Peterborough to Niagara to Kitchener-Waterloo, with over 9 million residents. It is designed to guide population and employment growth in the region to 2041, and to promote complete communities.

On Complete Streets specifically, the updated Plan required that “In the design, refurbishment or reconstruction of the existing and planned street network, a complete streets approach will be adopted that ensures the needs and safety of all road users are considered and appropriately accommodated.” (3.2.2.3)

The process of creating a new Official Plan in line with the Growth Plan takes years, but progress has begun. For example, the City of Burlington adopted a new Official Plan, Grow Bold, at the end of April, which includes a commitment to employ Complete Streets standards and establish a Complete Streets Strategy. The plan is now awaiting approval by the Region of Halton.

Of course, a number of municipalities already have Complete Streets policies in place – for example, the City of Waterloo’s Transportation Master Plan has included Complete Streets policy since 2011. Others have design manuals or streetscape guides in place, such as the City of Guelph’s Streetscape Manual for its downtown. The directive from the Province to use a Complete Streets approach in all road building and reconstruction projects is an exciting one that will significantly change our streets in the coming years.

TCAT has been tracking Complete Street developments locally and across the country for the past six years on our Complete Streets for Canada website.  The website highlights the successes and challenges of specific projects in the GGH. We also recently released a new version of the popular interactive tool for re-imagining streets, the Complete Streets Game.