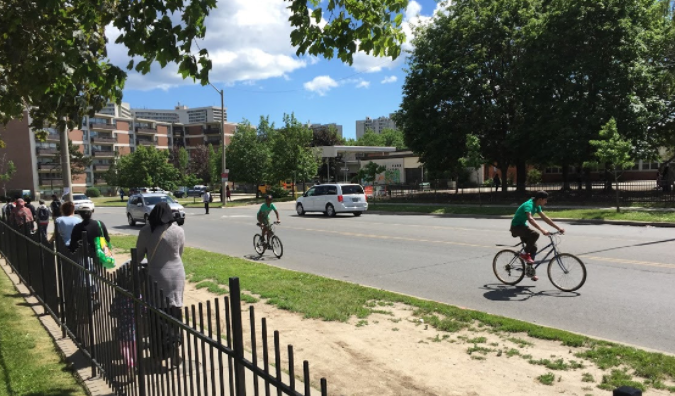 Image from the City of Toronto

This Sunday August 20th, from 2-5 pm, TCAT’s community animators will be engaging local residents at Flemingdon Park for the 2017 Bike Flemingdon Park and Thorncliffe Park Study.

This outreach is happening during the Flemingdon Park Summer Jam, a community event that will bring residents together for a local mural unveiling and celebration organized by the Friends of Flemingdon Park. Our community animators will be speaking with residents there about potential cycling routes as part of the City’s plans to add and enhance bikeways in both Flemingdon Park and Thorncliffe Park. City staff will also be present at the event to learn from residents and to provide additional information about the details of the study. Come and join in the celebration, learn about plans for enhancing cycling infrastructure in these communities, and contribute feedback.

Last year, TCAT created a neighbourhood portrait in the Flemingdon/Thorncliffe tower neighbourhoods. The City of Toronto has now recognized the area as a priority for targeted federal transportation spending, initiated this detailed study that references TCAT’s previous work in the area, and partnered with TCAT and the Flemingdon Health Centre for local community engagement.