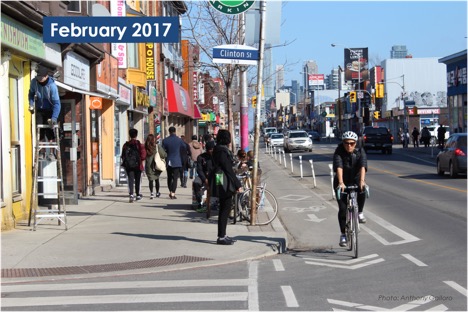 In the recent debate surrounding the (now permanent) bike lanes on Bloor Street, questions around winter cycling figured almost as prominently as those around economic impact. In approving the bike lane, City Council also directed staff to conduct counts of people biking along the street throughout the winter.

We already have an idea of what these counts might show. Year-round counts at Bloor and Castle Frank record winter bicycle traffic that is just over one fifth summertime levels. As of June 2017, the Bloor bike lane saw an average of 5,220 cyclists per day. If one fifth continue to cycle through the winter, we can expect to see over 1,000 cyclists a day on Bloor, making it as busy as some Toronto bike lanes in the summer.

While this number might seem high to some, it becomes less surprising when we consider Toronto’s climate data. Cara Fisher, an associate of the Winter Cities Institute, has classified Toronto as a “moderate” winter city, along with Calgary and Minneapolis. These cities experience January highs close to 0°C (-1°C in Toronto) and lows close to -10°C (-6°C in Toronto). Temperature extremes are rare.

Research in Quebec, Sweden and Calgary, though, has found that access to snow-free roads or paths is a more important factor than temperature or weather in making the decision to cycle. Toronto already receives considerably less snow than its severe winter counterparts (an average of 120cm versus 200cm in Montreal), and usually less than 5cm of it falls at once. In fact, Torontonians see more than 5cm of snow only 11 days a year on average, and a significant fall of 10cm or more happens only two to three times a year. This means that, assuming that the lanes are cleared quickly after each snowfall, Torontonians have many cold, clear days available to them that are perfect for pedaling.