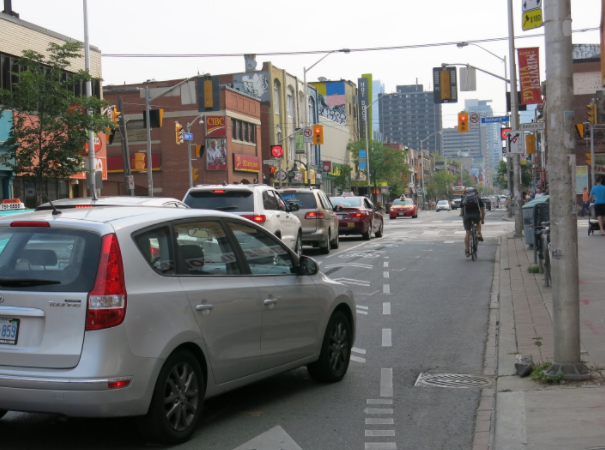 While separated bike lanes are becoming more common in Toronto, intersections remain a danger point for cyclists. According to a 2015 Cycling Safety Study conducted in Vancouver, the majority of collisions involving cyclists happen within intersections, and in 93% of cases, cyclists had the right of way upon collision. Currently, bike lanes in many Canadian cities disappear at intersections to make room for right and left hand turn lanes, leaving cyclists unprotected when they are at their most vulnerable.

Some municipalities are beginning to reassess the design of urban intersections, in hopes of improving safety and comfort for all road users.

One of the most prevalent types of collisions occurring in intersections is between motor vehicles turning right and cyclists proceeding straight, often called a right hook. According to the Vancouver study, right hooks account for 13% of all collisions involving cyclists, conflicts that can be addressed through intersection design. Adding a barrier and caution signs at the start of an intersection creates a visual reminder and physical separation between vehicles and cyclists. The barrier forces a wider, slower turn, thus reducing the likelihood of a collision. The City of Montreal recently installed an example of this design at the intersection of Rue de Bellechasse and St Laurent in Montreal. Notice how the level of protection for cyclists increases at the intersection.

Combining separation barriers with bicycle priority street signals and designated crossings separate from pedestrians can further improve the safety and orderly use of the intersection. The recent redesign of Burrard and Pacific Street in Vancouver provides a good example of options to consider when the opportunity arises to completely rebuild an intersection. A review of the Burrard St changes can be found on the Complete Streets for Canada website. 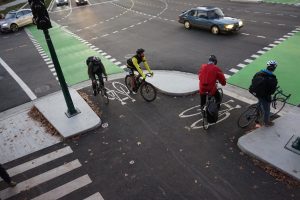 Toronto is also starting to innovate with intersection design. The nearly-completed re-organization of Bathurst and Adelaide provides cyclists with a protected contraflow lane and lay-by to safely access the Adelaide Street bike lane. Similar re-designs are planned for the Queen/Peter/Soho intersection and at Woodbine Ave/O’Connor Drive in 2018. 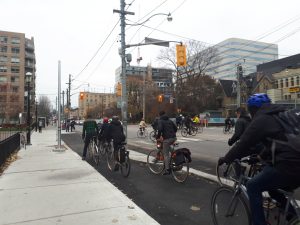