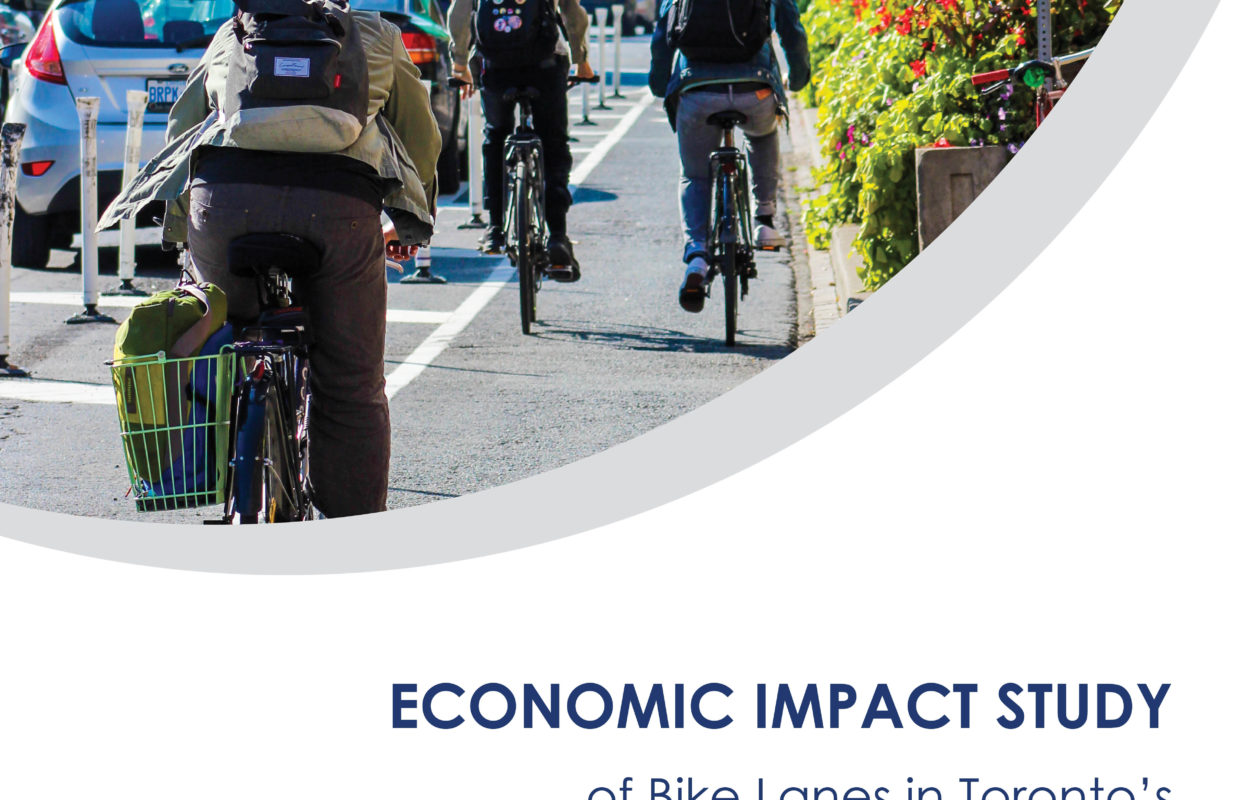 Bloor Street, in the vicinity of the bike lane pilot project, is economically healthy and experiencing growth, finds a new report released today by The Centre for Active Transportation (TCAT).

The study looked at four economic indicators – customer counts, visit frequency, spending, and vacancy rates in the Bloor Annex and Korea Town business districts – and found that, despite the removal of approximately 160 on-street parking spots and one traffic lane, business on Bloor Street continues to flourish.

While important, these findings should not be surprising. The study also examined the travel patterns of customers, both before and after the bike lane’s installation, and found that fewer than 10% drive. Walking remains the most popular travel choice (48%), but cycling almost tripled, growing from 7% to 20%. Over 90% of customers were thus unaffected by the reduced capacity for cars.

“Removing 160 parking spots to install a protected bike lane was, without question, a major change to Bloor Street. While the safety benefits are paramount and undeniable, the economic impact is important for the small businesses that line the street. This new research provides strong evidence that since most customers do not drive to Bloor, on-street parking is not essential to the street’s economic vitality,” says TCAT Director Nancy Smith Lea. “We also have confirmed that people who walk or bike are the best customers for small local business.”

The daily commutes of merchants, however, were significantly more impacted. Nearly half (49%) of merchants drive to work, meaning they face traffic and parking difficulties that their customers avoid by walking, cycling and taking transit. There was no increase in the number of merchants cycling to work, which, at 6%, remained their least popular travel choice.

The study was launched in 2015, nine months before the bike lane was installed, with funding provided by the City of Toronto, the Metcalf Foundation, the Bloor Annex Business Improvement Area (BIA), and the Korea Town BIA.

The research team worked together with the BIAs to develop an evidence-based methodology to assess economic impact, including deciding upon survey questions and economic indicators. Data was also collected on Danforth Avenue, a comparable shopping street with no bike lane, so that changes observed on Bloor could be placed in context.

TCAT partnered with academic researchers from the University of Toronto to design the study, and to collect, analyze, and interpret the data.

Surveys and bike counts were conducted on Bloor and Danforth before and after the installation of the bike lane in three time periods: fall 2015, fall 2016, and spring 2017. The vacancy scans took place in July 2016 and again in July 2017.

“This study was expertly designed to capture representative and unbiased data on the economic vibrancy of Bloor Street in the Bloor Annex and Korea Town business districts, and how that has changed over time as a result of the bike lane,” says Dr. Steven Farber, a quantitative transportation geographer at the University of Toronto Scarborough and the data analysis lead on the project. “The results are quite clear. Visitors to Bloor are cycling more, visiting more frequently, and spending more money in local businesses. All the while, a larger number of merchants are reporting higher customer counts when comparing 2015 to after the bike lane installation.”

TCAT’s report is part of the City of Toronto’s comprehensive strategy to measure a host of potential impacts of the Bloor pilot bike lane, including traffic operations, travel time, parking utilization, mode share, attitudes, and economic activity. On October 18th, the City of Toronto’s Public Works & Infrastructure Committee will review all the evidence that has been collected and make a recommendation about whether or not the Bloor bike lane should be made permanent.

• The number of businesses that reported 100 customers or more per day increased in the study area on both streets. Reported spending increased on Bloor and Danforth at a similar rate.
• Both before and after the bike lane, customers who arrive by foot or on bike reported higher levels of spending on Bloor Street compared to those arriving by car or transit.
• On both streets, locals (those living or working in the area) were 2.6 times more likely than those coming from further away to spend more than $100 per month.

• After accounting for other contributing factors such as age, gender and proximity, visitors reported coming to Bloor three days more per month after the bike lane was installed, while on Danforth visit frequency was unchanged.
• People who arrived on foot or on bike visited Bloor the most often, and people who drove or took transit visited nearly four days less per month.
• Vacancy rates held steady at 6% in Bloor Annex and Korea Town. On Danforth, they declined from 10% to 7%.

Shifts in Travel Patterns and Parking

• The percentage of customers cycling to Bloor nearly tripled (from 7% to 20%), a substantially higher increase than on Danforth Avenue, which has no bike lane.
• Walking remained the most popular travel choice, used by nearly half (48%) of visitors on Bloor, and driving is now the least (10%).
• Merchants on Bloor Street preferred to drive (49%) and there was no increase in cycling, which remained the least preferred travel choice (6%).
• The majority of merchants believed that at least 25% of their customers are driving to Bloor; however fewer than 10% of customers reported arriving by car.
• Parking difficulty increased on both streets for visitors who drove, growing by four times on Bloor (from 8% to 33%) and nearly doubling on Danforth (from 14% to 25%), though this street did not have any on-street parking removed.
• When looking at all visitors, the percentage who needed to find car parking and experienced difficulty remained small: 3% of all visitors on Bloor and 4% on Danforth.

Perceptions of Safety and Feedback on Bike Lane

• After the installation of the bike lane, the proportion of visitors who perceived Bloor Street as safe for cycling more than tripled (from 17% to 61%), and doubled among merchants (from 13% to 27%), while perceptions of safety on Danforth dropped (22% to 10%).
• The percentage of women who reported they now feel safe cycling on Bloor increased significantly more than men, from 12% to 58%.
• The majority of visitors (86%) and merchants (90%) provided feedback in response to an open-ended question soliciting thoughts or comments about the bike lane.
• While visitor comments were generally positive, the most common feedback related to the bike lane’s configuration and safety. Merchants raised more concerns than visitors, especially over impacts to business, but safety, parking, and traffic were also important issues.