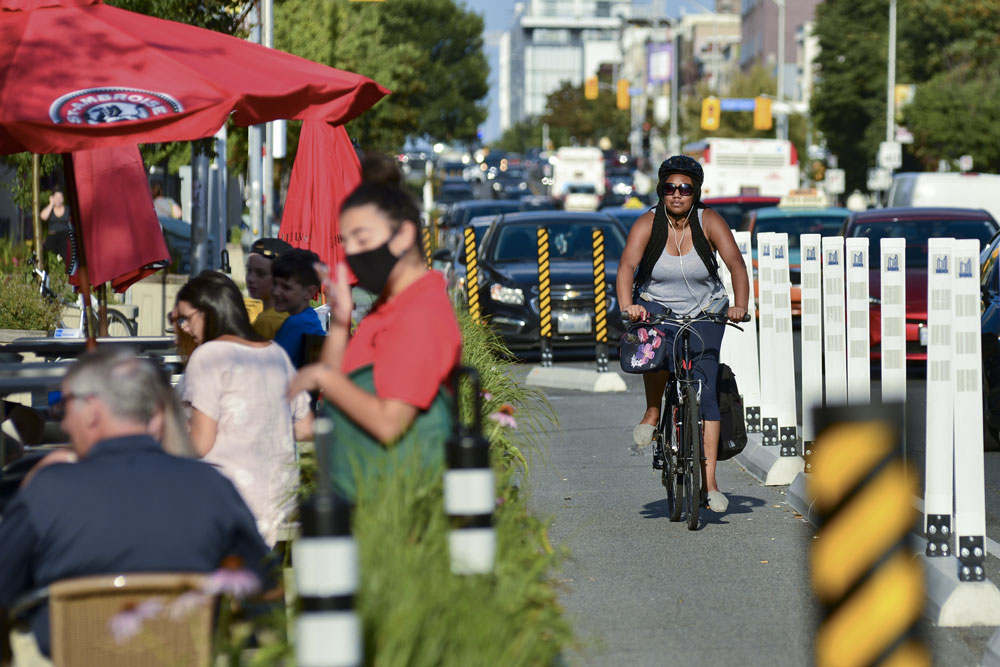 By vastly altering the way Torontonians experienced public life, the COVID-19 pandemic demanded that we critically reconsider how we use our streets and public spaces. ActiveTO was launched in response to the closures to ensure pedestrians and cyclists have space to move around, walk and cycle. Approved by City Council on May 28, 2020, ActiveTO transformed city streets by closing major road corridors to vehicle traffic, expanding Toronto’s cycling network, calming local street traffic in areas across the city, and redesigning streetside infrastructure in several locations.

In 2021, initial evaluation of the programs was conducted by TCAT, Park People, and 8 80 Cities, in collaboration with the City of Toronto. During the summer of 2022, further evaluation of the ActiveTO programs was conducted by Ethan Sansom at The Centre for Active Transportation, using survey data collected from ActiveTO installations across Toronto.

The impacts of the ActiveTO program were positive and encouraging. The data demonstrated that the ActiveTO installations encouraged mode share away from driving towards cycling and that cyclists expressed increased perceptions of safety, which led them to visit the installations more often. At the same time, the findings demonstrated important areas for improvement: proximity matters, and in order to achieve the greatest community and equity impacts, these programs cannot be clustered in the downtown core.

Replicating the successes of programs like ActiveTO, and refining the areas of improvement of such programs, will lead to a better Toronto and improve the health and mobility of Torontonians of all ages, races, incomes and locations

Here are the key findings from our evaluation Looking at Toronto’s Transportation Response to the COVID-19 Pandemic:

ActiveTO programs encouraged mode share away from driving towards cycling

You can read the full report here.