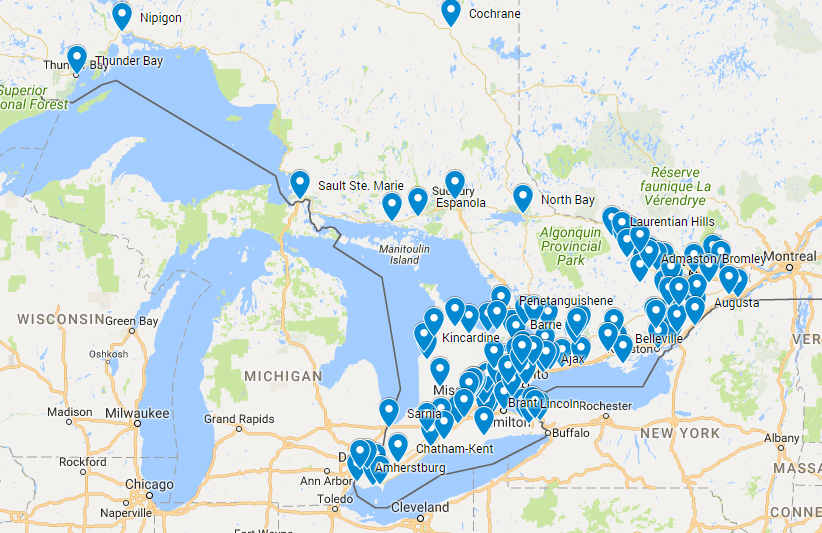 On December 4th, the Ontario government announced that all 120 municipalities who applied for the Ontario Municipal Commuter Cycling Program will be receiving funding for bike lanes, for a total of $93 million in 2018. At TCAT, we were curious to see where these 120 municipalities are located, so we mapped them. The results? A surprising breadth of investments being made across the province.

Toronto and the suburbs of the GTHA (such as Ajax, Richmond Hill, Halton Hills, Mississauga, Burlington and Hamilton) are well represented. However, over 30 municipalities in eastern Ontario, from small communities (Perth, Lanark, Elgin, Gananoque) to cities (Kingston, Ottawa and Cornwall), will also be receiving funding.

Interest in cycling infrastructure is growing in south-western Ontario, with Windsor, Leamington, Amherstburg, Chatham-Kent and London all receiving funding, and communities along the south shore of Lake Huron will be seeing more bike lanes (Kincardine, Saugeen Shores, Owen Sound and Collingwood).

The most northern municipality to receive funding is Cochrane. Thunder Bay, Sault Ste Marie, Sudbury and North Bay are all going to be expanding their bike networks as well.

Looks like the fall of 2018 will be a great time to tour Ontario by bike!